This post is based on an email that was sent and in no way reflects the views and opinions of ''Met'' or Jamaicanmateyangroupie.com. To send in a story send your email to likeacopcar.78@gmail.com
June 28, 2016 6:30 am 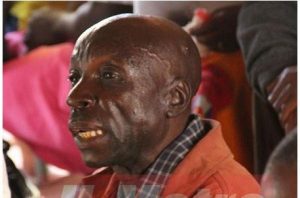 Couple Confess After Using ‘Black Magic’ To Have S3x With An Entire Village
A couple has been chased out of their village after confessing to have used mubobobo ( a kind of black magic whereby a man can supposedly have s*x with a woman from a distance and without her consent. In effect, it refers to a magical remote sexual intercourse, metaphorically called ‘blue tooth sex’, as it generally ‘connects’ perpetrator and victim within an eye-shot distance or even beyond). to have s*x with an entire village in Zimbabwe.

According to H-Metro, Taurai Muponda, 56, along with his wife Eunar Ndabalanga, 46, stunned villagers yesterday when they appeared before headman Rodius Kufandada Musonza confessing that they killed 38 people and engaged in sexual intercourse with several men and women using mubobobo. Muponda told the court that they had several s*x sessions with Moreen Munhundiripo without her knowledge using mubobo and many others in the village.

“I confess to having s*x with Moreen and other women in the village using mubobo but honestly speaking this is not my fault,” said Muponda. “It is a spirit that is in me and my aunt is the one who gave me the charm that I enjoy having s*x with any woman I admire and whenever that spirit possesses me I cannot control the feelings. If this court can help me find anyone who has powers to deliver me from this spirit I would be thankful since I do not like it. I am aware that my wife use the charm as well but I did not know it when we got married in 2007 following the death of her husband. I enjoy s*x through this charm and I rarely have s*x with my wife that is why we do not have a child since we got married,” said Muponda.

Speaking further during the confession, Eunar disclosed that she is responsible for the death of 38 people who include her relative and has powers to attract men for s*x using mubobo wechikadzi.

“Muponda is my fifth husband and the other four died because of that spirit which I got from one of my relatives who passed away long ago. I don’t like the spirit that is why I joined apostolic faith church ‘Nyenyedzi nomwe yenguwo tsvuku’ to look for deliverance. If there is anyone with powers to deliver me from this I am prepared to let it go since it has caused me untold suffering in my life. We are ever at each other’s throat with my husband that you can really not tell who is the man is when it comes to fighting when he wants his conjugal rights,” said Eunar

In his ruling, headman Musonza ordered the couple to look for an alternative place to stay saying the villagers are up against their evil acts and promised them to help in finding people who can deliver them from the evil spirits.

“This court heard that you were not forced by anyone to confess that you use charms that can kill people as well as charms that allow both of you to have s*x with villagers without their consent,” said headman Musonza. “You have told this court that you have the charms and because of what you have told this honorable court, it is in everyone’s best interest that you look for an alternative place to stay. I am reliably informed that you relocated to this village following the same issue with the village head where you used to stay,” said the headman Musonza not giving them a dead line to leave the village.

Muponda and Eunar told H-Metro after the ruling that they have nowhere to go and appealed to members of the public if there is anyone prepared to deliver them from evil spirits.

“I came from Mutare but honestly, I have nowhere to go and I don’t know when I will leave Goromonzi following this ruling. The unfortunate thing is that the ruling came by the time I am not in good books with my wife following this case,” said Muponda.

Villagers who came in their numbers, expressed joy after headman gave the judgment saying they were prepared to bay for the couple’s blood if the headman had allowed them to stay.