This post is based on an email that was sent and in no way reflects the views and opinions of ''Met'' or Jamaicanmateyangroupie.com. To send in a story send your email to likeacopcar.78@gmail.com
June 4, 2016 7:30 am

A member of a notorious gang operating across the south-south and south-east of the country, Gogo Daniel Ume (aka Full Payment), has told the police about how he usually donated food items and gifts to his church after every successful operation.

Ume is one of the three suspects nabbed by the Inspector-General of Police Special Intelligence Response Team in Rivers and Bayelsa states, following weeks of efforts to track down the criminals.

When the suspects were apprehended, they were found with three AK47 rifles, one automatic rifle, 12 magazines, 310 rounds of live ammunitions and dynamite.

Soon after their arrest, the suspects, Ume, Ikadoi Michael Isere (aka White Witch) and Ifeanyi Kalu admitted to a crime spree that included numerous kidnappings and bank heists in the last three years.

According to the IRT, while being interrogated, the suspects admitted that they carried out the two bullion van robberies which took place between 2014 and 2015 at a Diamond Bank branch at Trans Amadi, Port Harcourt, where they stole N360m.

The suspects told the police that their gang was responsible for a robbery attack on a Fidelity Bank branch at GRA, Port-Harcourt. In all these operations, several policemen were said to have been gunned down.

According to the statement made to the police during a foiled kidnapping attempt by the gang few months ago, they set ablaze a police patrol van along Psychiatric Hospital Road, Rumuigbo, Port-Harcourt.

But those were said to have taken place in Rivers State alone.

The gang reportedly extended their killing spree to neighbouring states like Enugu, where they took part in the robbery of a UBA branch in Owerri, Imo State in April 2014 and stole N5m.

They also admitted to attacking a First Bank branch in Enugu where one of their gang members identified as Akio was killed in June of the same year. The gang were said to have abandoned his body and fled.

However, amidst the robbery spree, the gang also undertook series of kidnappings and car-jacking which fetched them millions of naira.

Saturday PUNCH learnt that when the suspects were arrested, a Toyota Highlander SUV, Toyota Venza and a Ford Edge SUV, were recovered from them.

It was also learnt that in January 2014, the gang kidnapped a worker of an oil company, Agip, on whom a ransom of N16m was paid.

The police alleged that between 2013 and 2016, the gang killed at least 20 policemen in their various operations.

During a December 2013 robbery operation allegedly conducted by the gang at a supermarket along Obasanjo Way, three policemen, Inspector Dennies Akapan, Sgt. Ekwere Epoulo and Cpl. Okougor Nyambi were gunned down, after which the gang members took away the policemen’s Ak47 rifles.

Other police victims were Assistant Superintendent of Police Bamidele Mohammed, Insp. Austen Moore, Cpl. Prince Tigabara, the three policemen from the Elekahia division, who were escorting a bullion van filled with currency when they were robbed and gunned down by the gang.

Meanwhile, 30-year-old Ume has told the police that in February 2016 when they attacked a Fidelity Bank branch at GRA Port Harcourt, they blew up the door with dynamite and stole. He said before they left, they destroyed all the CCTV cameras on the premises and shot two people on the premises.

He told the police that one Promise, who had worked in the bank before as a student on industrial attachment, monitored the bank for two weeks before the attack. According to him, in several other robberies, the IT student provided them vital information about other banks in Port Harcourt.

Ume said, “Promise told us to ensure that operational manager of Fidelity Bank must not leave the bank or the operation would fail.

“I graduated from the Rivers State polytechnic in 2013, and that same year I was sent to prison where I enrolled for studies at the National Open University.

“My journey into crime started in 2012, when I joined the Vikings Confraternity and I became friends with a member known as Fabian, who was already into kidnapping activities by a gang known as Abiye. I also joined the Abiye gang and my first operation with them was the kidnap of a 15-year-old boy that fetched us N2m. I was given N150,000 out of it.

“Later, I followed the gang to rob a First Bank branch and I got N2m from that. I used part of my share of that money to pay my rent. The next operation we did at another First Bank branch in Enugu, one of our members, Kio, was shot dead by one of the policemen. We decided to go back to Owerri to rob another bank, while Promise was our informant.

“Promise told us to look out for the manager of the bank who usually held the key to the bank. But when we got there, we did not see the manager and we entered using a sledge hammer. What our gang got was not up to N10m but I was given N800,000.

“We later kidnapped a woman, and her husband paid N12m as ransom. I got N3m as my share from there. We also kidnapped another woman who was carrying huge money. She paid N2m before we released her. In one of our operations, we got information that money was being moved from a bank at Alakaya, off Trans-Amandi to the Port Harcourt International Airport.

“We once intercepted the bullion van on Airport Road, Port Harcourt. I tried shooting but my rifle jammed. A colleague, Chike, was shot and he fell, then Boma and White Witch rained bullets on the vehicle. Some of the foreign currency in the vehicle was destroyed but I got N4.5m from the money we stole during the operation. I bought a Lexus SUV for N2m, and gave N100,000 to an orphanage home. I also contributed N150,000 towards the roofing of my church. Each time I go for a successful operation, I normally buy bags of rice, noodles, diapers, and donate money to orphanages. 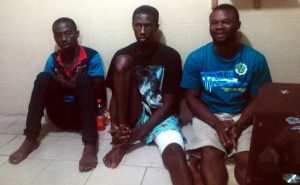 “I also bought two job slots for myself and my elder brother. I later sold my job slots to someone else who gave me N70,000 monthly. I also gave little money to my mum and sister.”

Ume said in another operation months later, he and his gang members attacked a Diamond Bank branch at Trans-Amandi, Port Harcourt.

According to him, they made away with N75m out of which he got N15m as his share. But that was the point he decided to call it quit.

He said, “I told other members to go and look for what to do with their lives with the money they had got because I was no longer interested since God had given me all I was looking for.

“After giving aids to children at the orphanage, I used part of the money to rent an apartment in Lagos and I paid for two years and half at Ajao Estate. I also bought furniture and other properties I needed. I then bought two plots of land in Bayelsa, I invested the rest into oil bunkering.”

“But after the money finished, a month before the election in Rivers State, we trailed a bullion van into the UST campus in Port Harcourt and robbed it of N39m. I got N10m as my share.”

The police have said they are on the tail of other members of the gang as investigation continues.