This post is based on an email that was sent and in no way reflects the views and opinions of ''Met'' or Jamaicanmateyangroupie.com. To send in a story send your email to likeacopcar.78@gmail.com
February 3, 2016 6:30 am 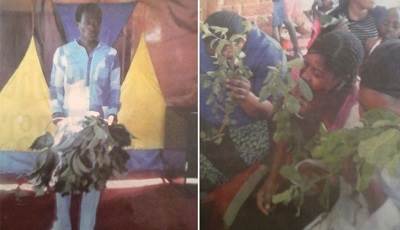 Muchemwa said his Testimony Church of ALL Nations confirmed the incident.

“It is true that I shared the word about the promises of God since the devil has attacked and got away with people’s wealth.

“It is written that the devil came to steal, kill and destroy, but Christ came to give life in abundance so I shared on John 10:10 and about the tree of life in the book of Genesis.

“I shared with the congregants urging them to feed from the tree of life demostrat6ing with tree leaves and as we speak I am receiving testimonies that stolen goods were recovered and non-working television sets, stoves and radios started to work after leaves were placed on them” he said.

He added that more miracles are in store.

The prophet once caused a stir when he stepped on the stomach of members including women during a service.