This post is based on an email that was sent and in no way reflects the views and opinions of ''Met'' or Jamaicanmateyangroupie.com. To send in a story send your email to likeacopcar.78@gmail.com
June 12, 2013 6:30 am 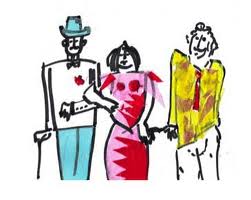 Two men fought in public yesterday in Mombasa over a woman they both claimed to be their wife.

The two alleged to have even sired children with the woman.

According to one of the husbands, Milton Mwakio, he was married to the lady for 16 years and they are blessed with three children. He told the media that he was shocked yesterday to find another man in his house.

He added that his work involved travelling to various places because he is a transit driver.

However, the other husband also claimed to have married the woman in 2011 and is blessed with one baby.

Neighbours who witnessed the two men exchanging blows blamed the womanbecause they have always known the man as her husband and they even have a daughter together.

The incident left residents of Bathsheba phase 5 in shock because the woman had been having different sexual partners for money. They blamed her and pointed anaccusing finger to the woman for toiling with the two men.