This post is based on an email that was sent and in no way reflects the views and opinions of ''Met'' or Jamaicanmateyangroupie.com. To send in a story send your email to likeacopcar.78@gmail.com
January 17, 2015 7:30 am 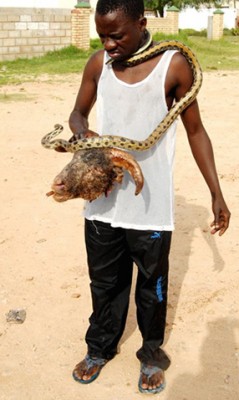 A woman from Kama Street in Motherwell NU2 kasi, Port Elizabeth in the Eastern Cape, SA, called a traditional healer when her daughter found the head of a sheep with needles and muthi smeared on it.

58-year-old Mavis Somyali immediately called a Ghanaian traditional healer but he ran away in fear so Mavis called a ‘Snake prophet,’ who came with a snake hanging around his shoulders.

Apparently Phumeza Dyani, 32, opened the kitchen door at about 5am on Tuesday and saw the head lying on the ground.

“She screamed for help and I jumped up to see what the problem was. I saw this scary sheep head with needles and muthi smeared on it,” Mavis said.

“The sheep skop was tied up with needles and nappy pins. It had muthi in its mouth.”

The traditional healer from Ghana was called initially, “but when he arrived he started shaking and nearly collapsed as he tried to hold it. He said it was too strong for him,” said Mavis.

Delano Madlanduna from KwaMhlabuyalingana in KZN was called.

“He parked his car and opened the boot and there lay the biggest snake I have ever seen,” Mavis said.

“The holy man showed no fear. He picked up the smiley and showed it to the snake and the snake wrapped itself around the skop.

“It looked as if it was licking the black muthi that was coming from its mouth. I think the snake defeated the evil smiley because it licked up the muthi and did not die itself.”

Mavis said evil spirits have been wrecking her home since 2003 when she survived a terrible car accident.

Her daughter, Phumeza said: “In March last year I survived a car hijacking. In November thugs arrived at my house and kicked in the doors. They wanted my car.”

Two weeks later she had an accident and her car was written off.

“We consulted a sangoma who told us evil powers want to kill me and my mum,” she said.

“It seems there is a season for women to die, followed by men dying.”

The snake prophet Madlanduna said: “Today someone was supposed to die in this family but the evil has been beaten.”

“With my snake we defeated the evil spirits,” said the man.