This post is based on an email that was sent and in no way reflects the views and opinions of ''Met'' or Jamaicanmateyangroupie.com. To send in a story send your email to likeacopcar.78@gmail.com
August 31, 2016 6:30 am

Tired of being lonely, a 27-year-old woman, Regina Uchechukwu, has prayed the Alakuko customary court in Lagos State to dissolve her six-year-old marriage to her husband, Sharafa Adeyemi, for allegedly abandoning her and their children.

“My husband is a furniture maker. I met him in my hometown, Ogoja, in Cross River State when he was producing some furniture items for a bank. A few weeks after, I told him I was pregnant and he ran away. I was so destabilised because I knew nothing about him or his family members. When I was delivered of twins, I called my husband to name the children, but he declined. To my chagrin, he said I should spend the money I was using to make phone call business to take care of the children. 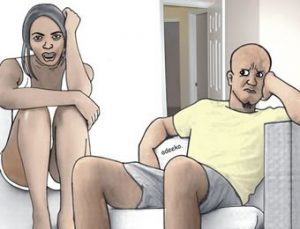 “Four years after, I traced my husband to Lagos, when the situation became unbearable. My husband abandoned us in his hometown, where his brother lived. The suffering, however, worsened after my husband’s brother said he could no longer fend for us.

“I had to remarry because I could not put up with my husband’s nonchalant attitude. My current marriage is a blessing. My husband takes care of my children’s upkeep, except their school fees because he says their father is still hale and hearty. So, all I want from Sharafa is to be responsible for the education of his children.”

However, Adeyemi denied the allegations, saying he gave Regina money when she was pregnant.

He said: “She informed me of her pregnancy during a phone conversation. I asked a colleague who was still in her hometown to give her the sum of N10, 000 for her upkeep. I made her realise that I was experiencing a lull in my business. Even when she traced me to Lagos, I gave them N400 daily. I had to avoid her because she later told me she and my colleague had an affair. I was also told she was fond of returning home with men at odd hours. Consequently, I had to abandon her and the children when I realised she was expecting another child.”

President of the court, Chief Awos Awosola, ordered Adeyemi to pay N32, 000 outstanding balance of the children’s upkeep and advised the parties to obey the law. The case was adjourned till October 23