This post is based on an email that was sent and in no way reflects the views and opinions of ''Met'' or Jamaicanmateyangroupie.com. To send in a story send your email to likeacopcar.78@gmail.com
August 8, 2013 6:30 am 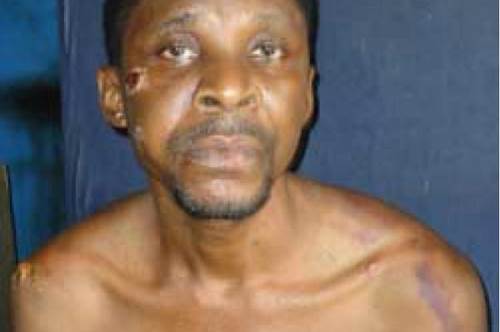 The Aba Police Area Command has arrested a 40-year-old Prophet/Pastor, Benjamin Ndubuisi, for having unlawful carnal knowledge of a 23-year-old man.

Investigations revealed that the prophet whose church is located at 89 Ukaegbu Road, Ogbor Hill has been involved in the unholy act with the victim since he engaged him as a worker in his church.

Trouble started for the prophet when his victim who gave his name as Ndukwe took ill two weeks ago and worried by his continued deteriorating health condition, confessed to his family about the secret love affairs between him and the gay prophet.

Residents of the area hinted that Ndubuisi, who is a prophet in one of the white garment churches in Ogbor Hill, engaged his victim as a worker in the church as a ploy to always have him around to satisfy his sexual urge.

The gay prophet is alleged to have administered oath to Ndukwe to stop him from divulging the details of the love affair between them to his relatives and members of the church.

Worried by the shocking revelation, Ndukwe’s parents alerted policemen leading to the arrest of the homosexual prophet.

The Prosecutor, Cpl. Galadima Rubies, told the court that the accused committed the offence at Ogbor Hill in Aba on July 28.

According to him, Benjamin had a carnal knowledge of a man’s son through the anus.

Rubies said the offence contravened Section 214 (1) of the Criminal Code, Laws of Abia 2005.
When the suspect was arraigned in court, he pleaded not guilty to the charge and was granted bail in the sum of N200, 000 with a surety in like sum.

Magistrate K. I. Udo said the surety should be resident within the court’s jurisdiction as part of the bail conditions.

The accused may be sentenced to 14 years imprisonment on conviction.

The case was adjourned to September 9 for further hearing.