This post is based on an email that was sent and in no way reflects the views and opinions of ''Met'' or Jamaicanmateyangroupie.com. To send in a story send your email to likeacopcar.78@gmail.com
August 27, 2016 8:10 am 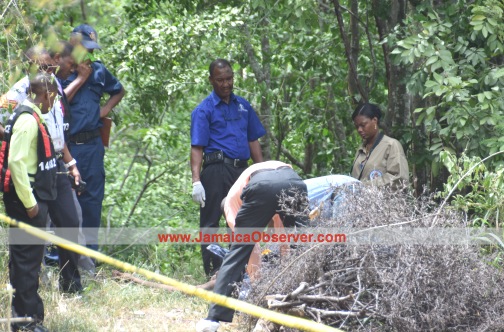 Members of the Jamaica Constabulary Force’s Forensic Crime Scene Investigation Unit look on as undertakers from the Tranquility Funeral Home remove the body of a man found in Gordon Town on Thursday. (Photo: Kenyon Hemans)

THE body of an unidentified man was found on the side of the Aberga Bridge on Gordon Town Road in St Andrew on Thursday.

The police believe the deceased, who is of dark complexion, slim build and about 6 feet 5 inches long, was in his mid-to-late 30s, was killed elsewhere and dumped at the location.

The body, which was clad in a white shirt, black pants and multi-coloured sneakers, was wrapped in a tarpaulin and his feet bound, with several stab wounds to the upper body.

Residents said approximately 9:00 am the residents stumbled on the body and summoned the police.

Residents who visited the scene said the man was not from Gordon Town.

Meanwhile, the Gordon Town police are seeking the public’s assistance in identifying the body.