This post is based on an email that was sent and in no way reflects the views and opinions of ''Met'' or Jamaicanmateyangroupie.com. To send in a story send your email to likeacopcar.78@gmail.com
June 14, 2013 3:38 pm 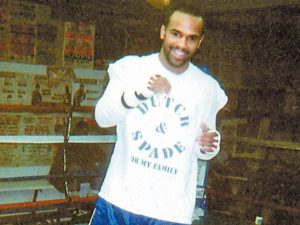 Wednesday, February 20, 2013
Kaboni Savage In His Own Words
By George Anastasia
For Bigtrial.net

Jurors got to hear more of Kaboni Savage in his own words today, but some of it came through a filter of defense attorney objections that apparently were aimed at blocking some of the more inflammatory comments uttered by the North Philadelphia drug kingpin.

Most of the afternoon session at Savage’s racketeering-murder trial focused on things he had said either from the witness stand at his 2005 drug trafficking trial or in conversations secretly recorded by the FBI from phone taps or electronic listening devices planted in his prison cell.

“You a rat,” Savage said on one tape in which he was describing a verbal confrontation he had had with Juan Rosado, a former associate who he suspected was cooperating with authorities. “F^^k you nigga. It’s gonna cost you your life.”

Rosado, who testified yesterday, was a major cocaine supplier for Savage from early in 2000 through January 2001. He called Savage one of his best customers and estimated that during that time period he had sold Savage between 125 and 150 kilograms of coke.

Savage learned that Rosado was cooperating while they were both inmates in the Federal Detention Center in Philadelphia in 2004. On tapes played this afternoon, he described to other inmates what he said to Rosado when confronting him about his cooperation.

In the same conversation, he said he told Rosado that Rosado’s decision to turn on him was going to cost “your life and your mom life.”

While those tapes were played for the jury, several others were apparently blocked by defense motions argued at sidebar — non-public — conferences with the judge and prosecution.

The prosecution has listed dozens of conversations in which Savage has threatened witnesses and the families of witnesses. It was all part of a pattern of fear and intimidation that authorities say Savage used to control his drug network.

“No witness, no crime,” was a comment on another tape that law enforcement says epitomizes Savage’s underworld philosophy.

The indictment charging Savage and three co-defendants is replete with snippetes of Savage commentary on law, order and “rats.” Some of those tapes have already been played for the jury during the trial which is now in its third week. Others are expected to be played as the case continues to unfold. Some will apparently be blocked by defense objections.

Savage’s defense attorney, Christian Hoey, has used his cross-examination to try to fashion a defense aimed at blunting the impact of some of his client’s comments. Hoey is not disputing what is heard on the tapes, but has argued directly and indirectly that much of what Savage said was out of frustration and anger fueled in large part by the fact that he spent most of his time at the Federal Detention Center in the Special Housing Unit (SHU).

Known by inmates as “the hole,” the eighth floor unit of cells is largely solitary confinement with 23 hours of each day spent in a 10-by-8 foot cell.

Many of the tapes cited in the indictment and some of those played thus far for the jury came from bugs planted in Savage’s cell in the SHU.

His comments, belligerent, volatile and full of invective, are aimed largely at former associates who were cooperating against him and at their families.

Some samples from the indictment:

“Gonna get their motherf^^king ass and their kids. Everybody gonna pay.”

“By the time the trial, everybody be dead…And we just getting started.”

“The fight don’t stop til the casket drop.”

“Those f***kin’ rats…Their kids gotta pay for making my kids cry. I want to smack one of their four-year-old sons in the had with a bat…Straight up. I have dreams about killing their kids…Killing their kids. Cutting their kids’ heads off.”

“Listen, don’t think my kids…gonna be the only kids crying…It’s gonna be some tears from blood behind mine…I’m just tellin’ ya you’ve been warned.”

Savage is on trial with three co-defendants, including his sister, Kidada, 30.

The original indictment in the case included 12 murders. Savage has been charged with 11, including ordering the firebombing of a North Sixth Street home in which six family members of a cooperating witness were killed, including four children.

He is charged with ordering that firebombing while awaiting trial on federal drug trafficking charges. In 2005, he was convicted and is currently serving 30 years.

Another murder listed in the indictment was the slaying of Tybius Flowers who was killed in March 2004 just days before he was to testify for the Philadelphia District Attorney’s Office in a murder case against Savage in Common Pleas Court. Authorities allege Savage ordered the Flowers’ hit from a city prison where he was being held awaiting trial.

Without Flowers’ testimony, the prosecution case fell apart. Savage was acquitted of that murder, a graphic example, authorities now say, of the “no witness no crime” approach to criminal justice.

Co-defendant Steven Northington, 40, is charged with carrying out the Flowers murder. Robert Merritt, 31, another co-defendant, is charged with taking part in the firebombing in which six members of Eugene Coleman’s family were killed. Kidada Savage is charged with setting up the arson on her brother’s orders.

Coleman and Lamont Lewis, another Savage associate who has admitted to taking part in the arson, are both scheduled to testify later in the trial which in its first three weeks has already provided the jury with an urban saga of guns, murder and drugs.

The 18-member jury panel (there are six alternates) heard testimony earlier today from Myron Wilson, a drug dealer who said that he bought at least 30 kilograms of cocaine from Savage between 1998 and 2002. Wilson was indicted along with Savage, Coleman and a dozen others in the drug trafficking case.

Like other witnesses, he testified that he also felt threatened. He told the jury how a Savage associate, Dawud Bey, confronted him when their paths crossed in a holding cell in 2004. Bey and Savage, he said, knew he had begun cooperating and had been relocated.

“Are they gonna move your mother too?” he said Bey asked him.

Asked if he considered that a threat, Wilson paused.

“It might have been coming as a threat,” he said. “But my mother was dead.”

Weapons seized during the 12-year FBI investigation into the Savage organization have also played a part in the trial. Several have been displayed to the jury.

This afternoon, with FBI Special Agent Kevin Lewis, the lead investigator in the case, again on the stand, Assistant U.S. Attorney David Troyer asked about a Mac-11 handgun found in an apartment in North Philadelphia linked to the Savage organization.

Lewis described it as a “submachine gun” and said authorities also found two clips — each holding 30 rounds of ammunition — with the weapon. He testified that while the gun was a semiautomatic, meaning that only one shot could be fired at a time, it could be converted to an automatic, rapid fire weapon by shaving down the firing pin.

Seconds later, Troyer played another Savage tape for the jury.On this one Savage boasted about a Mac-11 and how he and his associates had modified it for rapid fire “by shaving a pin.”

Savage said the gun was so powerful that it could “chop a tree down.”