This post is based on an email that was sent and in no way reflects the views and opinions of ''Met'' or Jamaicanmateyangroupie.com. To send in a story send your email to likeacopcar.78@gmail.com
July 5, 2014 7:00 am 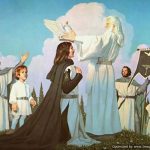 Why does it appear as if God is promoting and advancing my enemies over me?
I am always excited for others when it is their time to advance in life. The reality is their advancement is a sign
that I just could be next in line.

Once we come to an understanding of spiritual law concerning promotion and demotion, we quickly comprehend the fact that it is God and God alone that promotes and demote all people. So in actuality our promotion isn’t necessarily based on our hard work, our education, our being connected to important people etc.

How many folks that you know that have the advantage of the above mentioned but still are at the back of the line? My friend please read what I am about to say next very carefully. Promotion for all people (good and evil) is solely based on God’s calendar of promotion and demotion. One of the many attributes of God is that he’s omniscient, which simply means he’s all-knowing, all-seeing and there is nothing that escapes his knowledge of things past, present and future. Therefore one’s promotion or demotion is based on God’s greater plan for mankind as opposed to the glory of any individual.

For example, it may be surprising to you if I said that it was God that elevated Adolf Hitler, Saadam Hussein, The Pharaoh of Egypt, Nebuchadnezzar, King Herod, Muammar Gaddafi and other tyrant oppressive leaders. It was this same God that elevated peace makers such as a Dr. Martin Luther King, Guandi, Mother Theresa and so many others like them that brought peace to the world. Nevertheless, religion would mislead you to believe that God only elevates good people and demotes bad people when the truth is scripture clearly says otherwise.

“For promotion comes neither from the east nor from the west, nor from the south but God is the judge: He is the one that ultimately puts down one and sets up another” Psalm 75:6-7.

“For he maketh his sun to rise on the evil and on the good, and sendeth rain on the just and on the unjust” Matt.5:45

“And he changeth the times and the seasons: he removeth kings, and setteth up kings” Daniel 2:21

“The LORD gave, and the LORD has taken away; blessed be the name of the LORD” Job 1:21

“I have made the earth, the man and the beast that are upon the ground, by my great power and by my outstretched arm, and have given it unto whom it seemed meet unto me” Jeremiah 27:5.

“This sentence is by the decree of the angelic watchers And the decision is a command of the holy ones, In order that the living may know That the Most High is ruler over the realm of mankind, And bestows it on whom He wishes And sets over it the lowliest of men.” Daniel 4:17. Please read Job 12:12-25 for an in-depth understanding of God’s supervision of all promotions and demotions.

Absolutely no where will you find in the above scriptures where God said he will only demote those that do evil and promote only those that do good! Instead, the overall understanding of the above scriptures is that God who is all knowing chose whom he will to promote and advance his agenda according to his divine will. Scripture is saturated with such evidence. In fact the entire book of Judges is basically littered with such occurrences, where through the disobedience of the children of Israel God would raise up their Enemies to oppress them until they confess and cry out to him. Then he would rise up a leader among the children of Israel while demoting their opposition.

God’s plans are far more complex and far more reaching than our limited desire to be the Boss, the manager, a supervisor or even president of a company instead like I have pointed out to you via scripture those promotions and demotions in life will solely be based on God’s will for our lives at those times of our lives according to his calendar of his divine plan. This now explains why that person who only has a high school education is your Boss even though you’ve dome 4 years of college and holding a Master’s degree. This also explains why the children (God’s chosen people) of Israel were enslaved to Egypt for over 400 years in Egyptian bondage, all because God said it would be so according to his plan, Genesis 15:13-14.

Okay! So you didn’t get the promotion, you didn’t get the raise you expected neither did things advanced like you though it would have. Now let me ask you this question, are you upset and depress because your plans didn’t pan out or because God plans did?

I speak from experience and that is, when you name comes up on God’s calendar for elevation in whatever area of your life there is absolutely no one that can prevent that from happening. Just like how no one could have prevented the elevation of that wicked, illiterate or oppressive person from becoming your Boss. The bottom line is simply this, God knew what they were all about from day one, it was no surprise to him how wicked, mean and oppressive they have become to you and it was because of who they were, good or evil that he had calculated them into his plan to achieve his ultimate will. Wicked leaders as well as good leaders are all a part of God’s plan and no one can overturn the plans of God Almighty. Scripture plainly says, “There is no wisdom nor understanding nor counsel against the LORD” Proverbs 21:30

My friend, begin to meditate on this word today and put aside your agenda and ask God to reveal to you as to where do you fit in his agenda. Say to God, “Lord I am now aware that it is you and only you that promotes and demote, now remove from my heart that hate and bitterness I’ve developed because I felt so and so should not be elevated over me. Help me to see your way of doing thing as opposed to my limited view in the name of your son Jesus Christ. Amen!

Written By: Kevin L A Ewing
kevinewing@coralwave.com
kevinlaewing.blogspot.com
Posted by Kevin Ewing at 11