This post is based on an email that was sent and in no way reflects the views and opinions of ''Met'' or Jamaicanmateyangroupie.com. To send in a story send your email to likeacopcar.78@gmail.com
August 18, 2016 1:06 pm

For the first time since a cholera epidemic believed to be imported by United Nations peacekeepers began killing thousands of Haitians nearly six years ago, the office of Secretary General Ban Ki-moon has acknowledged that the United Nations played a role in the initial outbreak and that a “significant new set of U.N. actions” will be needed to respond to the crisis.

The deputy spokesman for the secretary general, Farhan Haq, said in an email this week that “over the past year, the U.N. has become convinced that it needs to do much more regarding its own involvement in the initial outbreak and the suffering of those affected by cholera.” He added that a “new response will be presented publicly within the next two months, once it has been fully elaborated, agreed with the Haitian authorities and discussed with member states.” 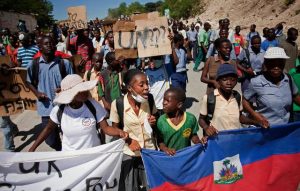 The statement comes on the heels of a confidential report sent to Mr. Ban by a longtime United Nations adviser on Aug. 8. Written by Philip Alston, a New York University law professor who serves as one of a few dozen experts, known as special rapporteurs, who advise the organization on human rights issues, the draft language stated plainly that the epidemic “would not have broken out but for the actions of the United Nations.”

The secretary general’s acknowledgment, by contrast, stopped short of saying that the United Nations specifically caused the epidemic. Nor does it indicate a change in the organization’s legal position that it is absolutely immune from legal actions, including a federal lawsuit brought in the United States on behalf of cholera victims seeking billions in damages stemming from the Haiti crisis.

U.N. Wants to Know Why Peacekeepers Did Not Stop Violence in South Sudan AUG. 17, 2016

Opinion Editorial
The Cholera Epidemic the U.N. Left Behind in Haiti JULY 6, 2016

Haiti’s Cholera Outraced the Experts and Tainted the U.N. MARCH 31, 2012
But it represents a significant shift after more than five years of high-level denial of any involvement or responsibility of the United Nations in the outbreak, which has killed at least 10,000 people and sickened hundreds of thousands. Cholera victims suffer from dehydration caused by severe diarrhea or vomiting.

Special rapporteurs’ reports are technically independent guidance, which the United Nations can accept or reject. United Nations officials have until the end of this week to respond to the report, which will then go through revisions, but the statement suggests a new receptivity to its criticism.

In the 19-page report, obtained from an official who had access to it, Mr. Alston took issue with the United Nations’ public handling of the outbreak, which was first documented in mid-October 2010, shortly after people living along the Meille River began dying from the disease.