This post is based on an email that was sent and in no way reflects the views and opinions of ''Met'' or Jamaicanmateyangroupie.com. To send in a story send your email to likeacopcar.78@gmail.com
June 8, 2016 5:54 pm

SCORES of people in James Mount, St Catherine, yesterday blocked the Sligoville main road to express their dissatisfaction with the pace of a police probe into a motor vehicle accident last Friday that resulted in the death of a resident.

Bearing placards, the residents were out from as early as 8:00 am demanding justice for 46-year-old Albert Palmer, a beloved farmer and community man, as they used motor vehicle shells and other debris to block the road at two sections.

According to residents, Palmer died while undergoing surgery at Kingston Publiic Hospital on Saturday, 24 hours after he was hit by a car in the community. The driver of the motor car fled the scene, but was caught by residents in nearby Rock Hall and handed over to the police in that community.

The accused driver was put in the custody of the Sligoville police, but yesterday the residents complained that the man was released. 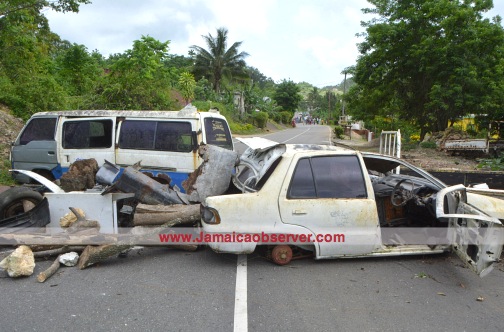 “Wi talking to the police, but we feel like the police are not giving us justice di right and proper way how we supposed to get it,” complained Jerome Murphy, brother of the deceased.
The residents said that they were particularly upset that the driver fled the scene after Palmer was hit.

“Is di man dem in here have to run him down go a Rock Hall, and when dem ketch him police let him go, so dem thing deh really hurt,” Palmer’s cousin, Denise, said.

Ironically, the residents said Palmer had taken it upon himself to urge residents to be cautious on the road.

“Him eva a tell people fi be careful and watch di road. When di pickney dem a come from school him always deh out here a mek sure dem safe; a nuff pickney him save,” one resident, who gave her name as Monique, said.

Deputy Superintendent Paul Campbell, from St Catherine North, who was among a team of police who turned up at the scene, updated the residents on the status of the probe.

“Investigation is underway, statements have been collected, but these matters can’t just be solved overnight; it takes time,” he said, while imploring residents who had witnessed the incident to give statements to the police.

Meanwhile, investigating officer, Sergeant Suzette Watt, of the Sligoville Police, told the residents that the person identified as the driver of the vehicle had been ticketed for driving an unlicensed vehicle and served a summons for having no insurance. She also assured the residents that the driver is known to them and can be located once a ruling has been made for him to be charged.

She also disputed the residents’ claim that the police visited the scene a day after the incident. She said that police were on the scene on the night of the accident and have been in dialogue with family members since Palmer’s passing.