This post is based on an email that was sent and in no way reflects the views and opinions of ''Met'' or Jamaicanmateyangroupie.com. To send in a story send your email to likeacopcar.78@gmail.com
September 23, 2014 6:00 am 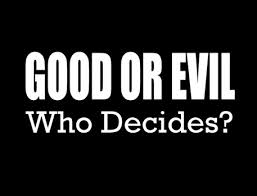 Evil as we know it to be is defined: as morally bad, or wicked, it is also defined as something harmful or tending to do harm or extremely unpleasant or troublesome.

With this type of meaning, it leaves one to wonder, how can an all righteous God call such a thing not only good but very good in the beginning of his creation?

Now left by it self it would appear as if it is a paradox, because if God is good, and insists that we refrain from evil then why would he call evil good?

In Genesis chapter 1, the word good is mentioned 7 times, which indicates perfection, completion or absolute. Nothing missing everything is in place for what is about to happen next. Amazingly, the last time in this same chapter when the word good is mentioned, it is followed by the phrase VERY Good. So we can agree that God was extremely pleased and satisfied with his creation.

Now in Genesis chapter 2: 9 which is now giving a detailed account of the plant part of the creation says, “And out of the ground made the Lord God to grow every tree that is pleasant to the sight, and good for food; the tree of life also in the midst of the garden, and the tree of knowledge of good and EVIL”. Now least we forget, Remember Genesis 1; 12 said, “And the earth brought forth grass, and herb yielding seed after his kind and the tree yielding fruit, whose seed was in itself, after his kind: and God saw that it was Good, so the tree of the knowledge of good and evil must me inclusive of these trees.

Then finally in Genesis 1:31 it says, “And God saw EVERY THING that he had made, which is inclusive of the tree of the knowledge of good and EVIL behold, it was VERY GOOD”.

Now, to unveil the revelation here, there is a word that we must discover the etymology of, and that is the word Good. The word good is an old English word which goes back to the prehistoric Germanic word “gath” meaning:
‘Bring together’ or “to benefit” which is where we get our English words (gather, and together); the progression of thought appears to be: brought together, unite, fitting, suitable, pleasing.

So, in essence when God said his creation was good, basically what he meant was all things together will equal good.

To prove or expound on this very important point lets look at Genesis 2:18 it said, “And the lord God said, it is NOT GOOD that the man should be alone so Eve was necessary to the creation for completion” So if the original meaning of good is to bring together or complete. Then not good must be the opposite. So the trend of thought is nothing in God’s creation was made to operate independent of itself, absolutely nothing all things are relative to something or someone.

Therefore, here it is folks, good can not be good by itself it is a culmination or gathering of good bad and indifferent that will eventually equal good. Interestingly enough, the Apostle Paul got a hold of this very profound revelation. Here is what he said, “And we know that All THINGS (GOOD AND BAD) work together for good, to them that love God, to them who are the called according to his purpose, Rom: 8:28……… WOW!!!!!!!!!

Consequently, when God said that evil was not just good, but very good, he is simply saying that evil was apart of the creation, so that when gathered with someone or something it will produce good.

This same Apostle Paul who is responsible for writing about two thirds of the New testament, said in the book of Romans 7 that he had great difficulty performing the things that were good. Until he discovered that there was a law governing all of this. “I find then a LAW, that when I would do good, evil is present with me. This is clear evidence that there is a mystery behind evil, and I am by no stretch of the imagination promoting evil.

I am fully aware that this is a bit hard to except, so I will make another attempt to solidify my point. I am sure we can all agree that we are designed by God to be creatures of comparison. For example all choices that we make in life they are compared to something else to bring about a decision. So to say a apple is bad, then the only way I would know that would be, to have experienced a bad one.

As a result you can see where evil becomes necessary, so much that God included it in his creation for our benefit. This is why Genesis 2:9 clearly states that God himself placed the tree of the KNOWLEDGE of good and evil in the middle of the garden.

The bible is saturated with the mystery of evil, as an example let’s look at 1Samuel 16. In this story God had rejected King Saul from being king, and he commanded Samuel the priest to anoint David to be the future king. Indeed there was a twist in the story, in verse 14, it say’s, ” But the spirit of the lord departed from Saul, and an EVIL spirit from the Lord troubled him (Saul).

Many are under the impression that Satan is the one who created evil, to the contrary, the Hebrew word for the word create is defined as making something out of nothing, and the Hebrew word for the word make is defined as making something out of existing material. Therefore only God the creator can create anything, all Satan can do is manipulate or make from his creation. The bible is crystal clear, when it says that God is the one that created EVIL (Isaiah45:7). Folks in no way fashion or form am I attempting to suggest to you that doing evil is ok. What I am suggesting though is that there is more to evil than we’re aware of, there is definitely a mystery to it.

So, as creatures that were designed to compare in order to make second by second decisions it can only happen by the KNOWLEDGE OF GOOD AND EVIL…….. WOW!!!!!!!!

The Apostle Paul told the believers of Rome, in his letter to that particular church in Romans 2:4, “That it is the “GOODNESS” of God that is leading men to repentance (Paraphrased). Interpretation: it is the gathering (goodness) of good and bad that will eventually cause men to repent. Changing the way he thinks through the good and bad circumstances of his life, making comparisons that should eventually cause him to make it right with his maker. The proof of this is called his testimony.

Every evil thing that you’ve experienced in your life time, that divorce, addiction, bad relationships, financial troubles could it have been a must that it happened to you so you could now recognize and make a decision on what is really good based on the evil that had a legal right to be present? Therefore that good person or thing that you’ve labeled good, is only as a result of the evil that brought you to that conclusion

BY: KEVIN L A EWING
kevinewing@coralwave.com

Posted by Kevin Ewing at 3:26 AM Links to this post
Email ThisBlogThis!Share to TwitterShare to FacebookShare to Pinterest