This post is based on an email that was sent and in no way reflects the views and opinions of ''Met'' or Jamaicanmateyangroupie.com. To send in a story send your email to likeacopcar.78@gmail.com
June 7, 2016 3:46 pm

HEATED exchanges between Queen’s Counsel KD Knight and Justice Lennox Campbell dominated yesterday’s hearing of the Trafigura matter, which was adjourned indefinitely after Knight refused to set a court date for the matter to be heard in the Court of Appeal.

The controversial hearing was set for mention yesterday in the Supreme Court to facilitate the attendance of People’s National Party (PNP) President Portia Simpson Miller and former Cabinet ministers, Robert Pickersgill, Phillip Paulwell, Colin Campbell, as well as PNP member, businessman Norton Hinds. They were last week subpoenaed by Justice Campbell to answer questions in relation to the $31-million donation that was given to the party by Dutch oil trading firm Trafigura Beheer.

Knight and Justice Campbell locked horns over Campbell’s decision to have an in-chamber meeting prior to the hearing of the matter in court, as well as the judge’s decision to agree on a date for the matter to be heard in the Court of Appeal.

The hearing began going downhill after the judge summoned the lawyers to meet with him in-chamber. Knight, who is representing Simpson Miller and who had taken issue with the request, refused to attend and instead sent his junior lawyers to the meeting. 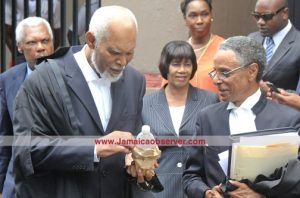 When the matter resumed in court, the judge explained that he wanted to meet with the lawyers to deal with some “housekeeping matters” such as how to address the public officials, including Simpson Miller, whom he said he will address as Madam Prime Minister.
But Knight objected.

“She is not the prime minister. Every judge in Jamaica ought to know that she is the leader of Opposition,” Knight told the judge.

He also told the judge that he did not think that the meeting was substantive and that was why he did not attend.

The judge then pointed out that he also wanted to agree on a date for the hearing of the appeal.

But Knight said there was no need for the registrar to meet with the parties in the judge’s chamber to set a date and that he was not going to be part of any “breach of protocol”.

The judge, however, insisted that they agree on a date but was strongly opposed by Knight.

“I am not doing it because you have no jurisdiction to tell me that I have to set a date,” the Queen’s Counsel emphasised

Justice Campbell then asked Knight if that was the posture he wanted to adopt.

“Very hostile, I have to be,” Knight quickly answered.

The judge later stated that: “This is being made into a fractious matter and all the court is trying to do is to use its power to fulfil a treaty obligation.”

Further to that. Justice Campbell said: “This is not a trial; nobody is seeking to make it into a trial and all the air and getting on, we are doing what we are doing and nobody has to tell us what to do.”

The judge then pointed out that he did not intend to put off the matter without setting a date, but was interrupted by Knight, who pointed out that the lawyers will be in touch with the registrar to set the date.

Justice Campbell then told Knight that he would proceed no matter how often he stood up.

But Knight, in a quick response, told the judge that his orders would be disregarded as often as he made them.

At one point, Knight also shouted to Justice Campbell: “Don’t shout at me because I can shout as well.”

Justice Campbell later told Knight: “It’s a sad day when you, as a Queen’s Counsel, can get up and behave as you are.”

Director of Public Prosecutions Paula Llewellyn, following the war of words, told the court that the crown counsels will always behave uncourteous, while Knight said that he and his team would always be honest and truthful to the court.

In the meantime, Attorney Patrick Atkinson told the court that the hearing of the matter in the Appeal Court was being delayed because Justice Campbell has not presented the court with his reasons for ruling that the PNP officials should answer in open court questions about the $31-million donation.

But the prosecuting counsel, Andrea Swaby, said that the Court of Appeal had not asked for Campbell’s reason in writing but asked for a transcript of the hearing, which was handed over to the Appeal Court from last December.