This post is based on an email that was sent and in no way reflects the views and opinions of ''Met'' or Jamaicanmateyangroupie.com. To send in a story send your email to likeacopcar.78@gmail.com
March 14, 2016 8:23 am

BELIZE AND GUATEMALA AT WAR OVER RIVER

PRESS RELEASE
Incident Between Belizean and Guatemalan Forces at Sarstoon 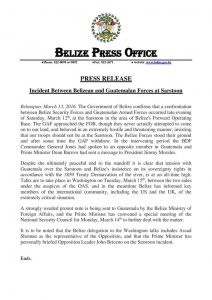 Belmopan. March 13, 2016. The Government of Belize confirms that a confrontation between Belize Security Forces and Guatemalan Armed Forces occurred late evening of Saturday, March 12th, at the Sarstoon in the area of Belize’s Forward Operating Base. The GAF approached the FOB, though they never actually attempted to come on to our land, and behaved in an extremely hostile and threatening manner, insisting that our troops should not be at the Sarstoon. The Belize Forces stood their ground and after some time the GAF withdrew. In the intervening period the BDF Commander General Jones had spoken to an opposite member in Guatemala and Prime Minister Dean Barrow had sent a message to President Jimmy Morales.

Despite the ultimately peaceful end to the standoff it is clear that tension with Guatemala over the Sarstoon and Belize’s insistence on its sovereignty rights in accordance with the 1859 Treaty Demarcation of the river, is at an all-time high. Talks are to take place in Washington on Tuesday, March 15th, between the two sides under the auspices of the OAS, and in the meantime Belize has informed key members of the international community, including the US and the UK, of the extremely critical situation.

A strongly worded protest note is being sent to Guatemala by the Belize Ministry of Foreign Affairs, and the Prime Minister has convened a special meeting of the National Security Council for Monday, March 14th to further deal with the matter.

It is to be noted that the Belize delegation to the Washington talks includes Assad Shoman as the representative of the Opposition, and that the Prime Minister has personally briefed Opposition Leader John Briceno on the Sarstoon incident.