This post is based on an email that was sent and in no way reflects the views and opinions of ''Met'' or Jamaicanmateyangroupie.com. To send in a story send your email to likeacopcar.78@gmail.com
July 20, 2016 7:00 am

‘He was our oppressor’

“We were digging the grave and the man just came up on us and pulled out a gun and pointed to us. He also knew where one of us lived and asked us if we wanted to live. He then told us to cover back up the grave which we did,” Mohammed said.

Mohammed said the gunman waited until the grave was covered and then left. A vehicle was waiting for him at the cemetery’s entrance.

Mohammed said as soon as the car drove off he called the police and told them what had just happened.

“The police came and stood guard while we dig back up the grave. The police stayed with us right through. We were real frightened but then okay when the police came with their guns,” Mohammed said.

As the hearse pulled up near the gate of the mosque, members of the Unruly ISIS gang, simultaneously, were reportedly shooting up the air, ringing out “joy fire” in celebration of Alexis’ demise.

Back at the mosque there was a heavy police presence, including officers from the T&T Police Service’s Riot Squad, Special Branch and Guard and Emergency Branch. Also, keeping a watchful eye on the evening’s proceedings were members of the T&T Defence Force. Hovering overhead was a helicopter attached to the Ministry of National Security.

Several minutes after Alexis’ body was carried onto the compound of the mosque, Jamaat-al-Muslimeen leader, Imam Yasin Abu Bakr, and his entourage of security walked in for the viewing of Alexis’ body.

When Abu Bakr reached up to the coffin he placed his hands together up to the chest and whispered a Dua (Islamic prayer) for his dear friend, Alexis.

Alexis, 51, was killed on Sunday while at his business place at Freedom Street, Enterprise. His hit was ordered by the Unruly ISIS gang and carried out by a senior member, Thomas “Hamza” Sharpe, who was himself killed by Alexis during the attack.

The T&T Guardian was told yesterday that after Alexis was killed, a senior member of the rival gang wrote on his Facebook wall: “Dead or alive mission accomplished.”

Speaking with the T&T Guardian, an unidentified member of the Unruly ISIS gang claimed that Alexis was an “oppressor” and they were left with no choice but to get rid of him. 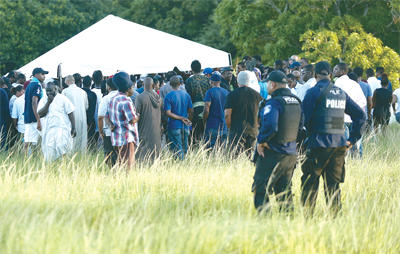 “Robo served us injustice and oppressed us. Also, Abu Bakr and his men. All of them are oppressors that we intend to get rid of. It’s our goal. We, the youths, are being oppressed for too long,” the Unruly ISIS gang member said.

When asked about the claims of the gang later during Alexis’ funeral, Abu Bakr told the T&T Guardian that those claims were unheard of.

“We are not oppressors. My men in the red hats and boots are not oppressing you (directing to the T&T Guardian). No one is afraid of us,” Abu Bakr said.

Speaking with members of the media just before he left, Abu Bakr, referring to calls made to lock down the Enterprise community, said there was no need for the police to do so.

“Why would they want to cause discomfort to the residents in the area? It is grossly unfair,” Abu Bakr said.

A member close to Alexis told the T&T Guardian on Monday that he was killed because he was about to expose the gang and its links with members of the protective services in criminal enterprise.

Imam Taulib Searles, who officiated the funeral service, called on the community to understand the reality of what had happened and strive to do better for themselves and the community.