This post is based on an email that was sent and in no way reflects the views and opinions of ''Met'' or Jamaicanmateyangroupie.com. To send in a story send your email to likeacopcar.78@gmail.com
October 29, 2015 7:03 am

TRINI MOB MAY HAVE BEHEADED MAN 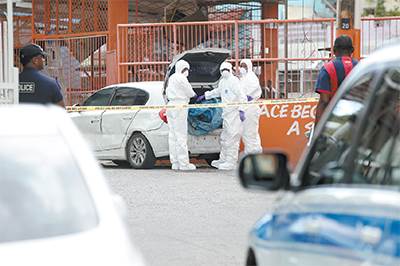 Crime Scene Investigators prepare to remove a headless body from the trunk of a BMW Hatchback at the corner of Duncan and Prince Streets, Port-of-Spain, yesterday. The body is still to be identified. PHOTO: MARCUS GONZALES
Police say they are bracing for an all-out war in the underworld after a man was found decapitated in the heart of Port-of-Spain yesterday in what they say was a mafia-styled killing.

The unidentified man’s head was found in a garbage heap along Pall Mall Street, East Dry River, around 5 am while the rest of him was found stuffed in the trunk of a damaged white BMW 1 series about seven hours after. The style of killing is similar to that of Mexican drug cartels who behead their victims and dismember their bodies to warn others that they are not to be messed with.

Yesterday’s incident also came a day after officials at Trinmar found a man’s body trapped in an offshore platform. Southern police also linked that killing to the drug trade. Late yesterday police said they believed the man was a known Las Lomas drug dealer but they would await confirmation today when relatives turn up to identify the body at the Forensic Science Centre, St James.

At the scene of the discovery at upper Duncan Street, East Dry River, head of the Port-of-Spain Division, Snr Supt Johnny Abraham, said the decapitation was clearly a message sent to the individuals in the underworld. “I believe it is a strong message. Whoever did the killing sent this to some underworld group telling them that they could lose their men and so on, I believe so,” Abraham said.

According to the police, the man’s head was found by Port of Spain City Corporation workers disposing of garbage yesterday morning. Residents said they did not know the identity of the man.

Speaking to the T&T Guardian yesterday, a corporation worker, who did not want to be identified, said his colleagues were stunned when the head rolled out onto coconut branches as they were picking up bags of trash. He said when he was told of the discovery he cursed his co-workers telling them it was no joke to make. He said when he was shown the head he was in disbelief that it was a human head initially.

He, however, thanked God he did not have breakfast, noting he was sure to have regurgitated any meal after a closer examination proved it was a human head, which was “cut cleanly.” As the sirens of police vehicles blared, escorting the funeral agency transporting the head, children from the nearby St Hilda’s Government Primary School were heard screaming and playing.

Police subsequently went in search of the man’s body at the Beetham landfill but came up empty handed. Just after noon, however, officers were called out again after the man’s body was found, wrapped in a blue tarpaulin and shoved in the trunk of the car parked outside the Supa Hardware at the corner of Duncan and Prince Streets. The body, with the hands tied behind the back, was already badly decomposed.

A nearby businessman said the car had been there since Tuesday morning and police were called to investigate but when they came they merely peered inside and left, he said. Officers returned later that day with a woman of East Indian descent. Again they looked through the car, opening the doors before leaving. The car, which was blocking the entrance to another business place, was then pushed aside by residents, but no one checked inside the trunk.

Yesterday, however, the stench of the man’s rotting flesh brought the realisation that something was amiss and again police were called again. This time the trunk of the car was searched and the headless body was found. Residents of the nearby “Plannings” flocked to the area. Some accused international terrorist group ISIS of the killing. Others wondered what type of man would chop off another’s head and remove it.

Abraham later criticised the removal of the car from in front the business and called on citizens to work closer with police. “What I am saying is if everyone does their part we can help T&T be a better place. If a strange vehicle is blocking your entrance, why would you call someone to push it away before you call the police?” he asked.

“I am clamouring for cameras for the longest while. I don’t want a camera where if something happen you have to beg someone to get the footage, I want cameras that you can monitor it to get the video anytime and that someone is monitoring it all the time so you can get the action live as it is taking place. What I want too is better cameras.”

He said for the year the Port-of-Spain Division had recorded 72 murders, including the decapitated man. He said police had received some information about the beheading but said he could not divulge it. The murder toll for the year stood at 357 up to yesterday.