This post is based on an email that was sent and in no way reflects the views and opinions of ''Met'' or Jamaicanmateyangroupie.com. To send in a story send your email to likeacopcar.78@gmail.com
August 30, 2016 4:01 pm

SO SAD, FATHER SAYS HE LOVED THE SON HE KILLED (TRINIDAD)

Four months after burying the abusive son he killed in self-defence, Krishna Sieunarine says he should have been the one who died.

At his Gopie Trace, Penal home this week, a tearful Suenarine recalled the incident leading to his only son Sham Sieunarine’s death on May 9.

Sieunarine, 59, said: “I acted in self-defence, he was not good at all. He use to drink alcohol and behave bad. He was with a cutlass chopping the door to get to me, to kill me. I wish my child could walk back into this house today. Is one son I had and I loved him, but he wasn’t nice, I won’t lie to tell you. And it wasn’t his fault, is following bad company. We trying five years now with him, but only three months before he gone, he was going haywire. But I wish it had happened to me. I was trying to protect my wife and me. If he killed me, he would have killed her to. ” 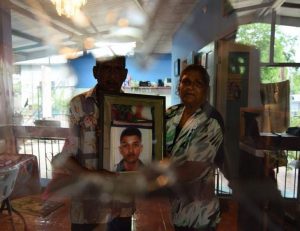 FLASHBACK: Brought from the police station, a handcuffed Krishna Sieunarine looks at the body of his son Sham Sieunarine during the funeral service at the family’s Gopie Trace, Penal home in May. Krishna Sieunarine killed his son in self-defence when he was attacked, police concluded, and he was later released from custody. Photo: Innis Francis.

The son died from stab wounds to the neck and abdomen, and his father was kept in custody for almost a week until the Director of Public Prosecutions ruled that the case would go to a Coroner’s inquest.

During his detention, the father was allowed to attend his son’s funeral at the family home.

Sham Sieunarine, 29, worked in construction and was an A-class woodwork technician who provided for the family.

Siuenarine said since Sham’s death, things just got worst for him and his wife’s failing health.

“I spent over half a million dollars in woodwork equipment for him from the US. He was the bread winner in the family. But you see, when children follow bad company, it is a bad thing. Now I have to live with that grief, I don’t know for how long. I expected my son to marry and give me grandchildren. Now I can’t think about that, he gone,” Sieunarine said. He said: “What I pass through, I don’t wish that for nobody. I remember I spent seven days in police custody. And when it was his funeral, I had to beg, I fall on my knees and beg them to bring me to the funeral. To see that face for the last time. And they bring me to the funeral on conditions and I was glad for that.”

Sieunaine’s 57 year old wife Flora said: “I watch his (Sham’s) room every morning. Every morning I have to live with that until I die. I does suffer with pressure and heart. I don’t feel well at all…Since he gone we have plenty bills piling up on us. We trying to get government help. I applied for a Food card, but we didn’t get any answer as yet”.