This post is based on an email that was sent and in no way reflects the views and opinions of ''Met'' or Jamaicanmateyangroupie.com. To send in a story send your email to likeacopcar.78@gmail.com
February 17, 2016 7:27 am

IAN ALLEYNE SEH HIM GOING TO CLEAR HIM NAME

He made the comment after securing bail at the Chaguanas Police Station, having earlier undergone an MRI scan at the Eric Williams Medical Sciences Complex (EWMSC), Mount Hope, after he sustained a concussion when he was slammed into a vehicle by Alexander earlier in the day as he was being arrested.

Alleyne vowed to fight the spurious charges against him from Alexander, including using obscene language and resisting arrest, insisting that yesterday’s ordeal was due in part to a ratings war going on between the competing crime programmes.

The argument had been earlier supported by Alleyne’s lawyer, Gerald Ramdeen, who called on acting Police Commissioner Stephen Williams and head of the Police Complaints Authority (PCA) David West to conduct a thorough investigation into yesterday’s events.

He said: “It is very unfortunate what Alleyne was put through because, clearly, one person is using police powers to abuse another citizen for private gain and many consequences can flow from this and flow from the actions of the police.

“My client is being victimised and treated in a particular way by an officer who has a competing show on a competing channel and if this is what we have come to in 2016, it is very unfortunate. I hope the authorities, moreso the PCA, pick up this matter and deal with what has transpired here and let the chips fall as it may.”

He added: “The footage will verify what my client indicated to me as to what took place this morning (yesterday).”

Alleyne previously had Alexander as a co-host on his Crime Watch programme and often accompanied members of the North Eastern Division Task Force on police exercises.

However, the two split and Alexander now hosts his own programme. Both have been exchanging verbal jabs at each other in recent months as they tried to win greater viewer share.

Yesterday’s incident occurred when Alleyne and Alexander ended up at the home of a Chaguanas businessman accused of domestic abuse, as police were about to make an arrest and search the property.

The exercise was being conducted by officers of the Chaguanas Police Station. The entire incident was captured on video by Alleyne’s cameraman.

At about 9.30 am, Alleyne was following up a domestic violence abuse story for his show and went to the home of the woman’s husband. He was invited inside by one of the businessman’s close relatives.

It was at this point that Alexander turned around, walked up to Alleyne and grabbed his arm and pushed him. As other officers tried to figure out what was going on, Alexander claimed Alleyne had used obscene language towards him.

Alexander then began pushing Alleyne off the compound and as the Crime Watch host asked why he was doing this, body slammed him into the businessman’s Toyota Prado which was parked at the side of the road. The impact caused a visible dent on the vehicle’s right side front door.

Alleyne was then handcuffed, placed in a police vehicle and subsequently taken to the Chaguanas station.

At the station, during a brief interview, Alleyne said he was shaken up and trying to be good. He also denied using obscene language or assaulting Alexander.

After he was taken to the Chaguanas Health Centre for treatment, Alleyne said he was in extreme pain as his arm had been twisted and squeezed. He also complained of body pains and a severe headache.

On his talk show yesterday, Alexander insisted Alleyne had obstructed the police in the course of their duties and resisted arrest. He also said by attempting to enter the compound Alleyne could have potentially contaminated the crime scene and that was the reason he initially asked him to leave.

Ramdeen later said given the circumstances surrounding the way in which Alleyne was arrested, there seemed to be a flagrant abuse of police power “in the worst possible way.” He said in a brief conversation with Alleyne after his arrest, his client denied all the accusations made against him.

“My client was carrying out his civilian duties and what transpired thereafter, Alexander assaults him, body slammed him, wring his arm and in the process of doing that moved to arrest Ian, no bail. There is a most flagrant abuse of police power here,” Ramdeen said. 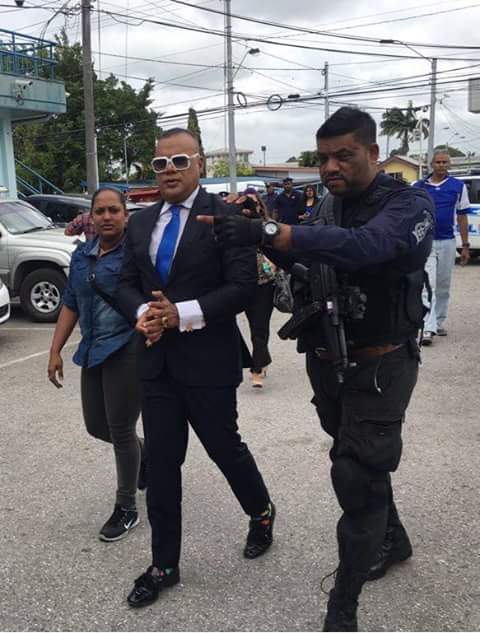 He also said Alleyne was treated like a common criminal as he was placed in a station holding cell along with other people to be charged on more serious criminal offences.

Ramdeen said while he was interviewing Alleyne, Alexander kept on walking up and down the corridor, adding that for the first time in 15 years he had seen a police officer take a cellphone and video record someone during an interview with their lawyer.

“I indicated that this could be done inside but not from outside of the room. I have never seen a police officer video record someone while they are being interviewed with their lawyers,” Ramdeen said.

Minutes after being taken to the station, Alleyne complained of feeling unwell. An EHS ambulance was called but none arrived and Alleyne’s personal doctor, Dr Rai Ragbir, was urgently called to the police station. But when Ragbir arrived he was not allowed to give medical attention to Alleyne.

Speaking with the T&T Guardian, Ragbir expressed concern over Alleyne’s condition, saying he suffered from hypertension and high blood pressure.

“I could have been supervised to attend to Alleyne because life and death can be anytime. The stress alone can kill you.

“Everyone should be treated at one level. He needs medical treatment and waiting on paperwork before he could get that is not acceptable. What is the difference between him and someone having a heart attack or stroke or severe asthmatic attack?” Ragbir said.