This post is based on an email that was sent and in no way reflects the views and opinions of ''Met'' or Jamaicanmateyangroupie.com. To send in a story send your email to likeacopcar.78@gmail.com
October 27, 2015 6:57 am 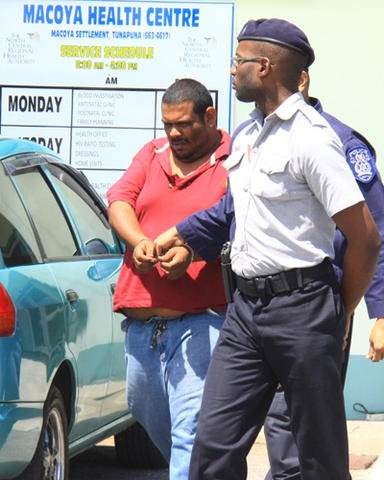 Dexter Gobin, left is taken from the Macoya Health Centre after falling ill, following his appearance in the Tunapuna Magistrates Court yesterday. Photo: NICOLE DRAYTON
Accused child abuser Dexter “Jahlo” Gobin had to be separated from other prisoners at the Tunapuna Court yesterday after they threatened to kill him.

Moments after appearing in court charged with abusing a toddler, Gobin, 32, was taken to the Macoya Health Facility after complaining of feeling unwell.

Gobin became a social media pariah after a video of the alleged assault went viral last week. Gobin, a diabetic, spent about 30 minutes being attended to by staff at the health facility before being taken back to the Tunapuna Magistrates Court where he hoped to secure $150,000 bail for his release.

He and his Jamaican wife, Yanique Taylor-Gobin, are charged with two offences each, in that they on October 17 and 21, willfully assaulted two-year-old Esha Markens.

The couple is accused of beating the child at their Rafferty Street, St Joseph, Maracas home.

Taylor-Gobin, 21 was not granted bail, having overstayed her time in the country and has a detention order against her. Up to 4 pm yesterday when the court was closed, Gobin had not secured his bail and will spend at least the night at the Remand Yard.

The couple appeared before magistrate Gillian David-Scotland and are scheduled to re-appear on November 26.

Their attorney, Fareed Ali, wrote to the Commissioner of Prison, Sterling Stewart, in anticipation of his client not accessing his bail and asked that everything necessary be done to keep him away from the rest of the prison population.

Ali said inmates at the Remand Yard, both at Frederick Street and Arouca, had telephoned radio stations and posted on social media that they will physically harm Gobin if he was sent to prison.

When the matter was called, the media and other people in the courtroom were put out, including the Immigration Officer who attended court in order to serve the detention warrant on the woman.

Outside the courthouse, Ali said Gobin was ordered to remain 100 metres from the child as well as report to the St Joseph Police Station every Monday, Wednesday and Saturday between 6 am and 6 pm.

He said the bail requirements for his client, a PH taxi driver, were too harsh. He said in law his client was eligible for bail given his good character prior to his court appearance. I asked for a cash alternative, but that was not granted.

Ali added that the matter was an indictable matter and he would be considering entering a plea bargaining deal depending on the strength of the evidence presented by the State.