This post is based on an email that was sent and in no way reflects the views and opinions of ''Met'' or Jamaicanmateyangroupie.com. To send in a story send your email to likeacopcar.78@gmail.com
October 22, 2016 6:20 pm

For the past month, residents of Fitz Lane, Vance River, La Brea, say they have been making complaints to State-owned oil giant Petrotrin, begging the company to clean up a spill in a watercourse that runs through their community.

Until Wednesday the residents’ complaints had gone unanswered. 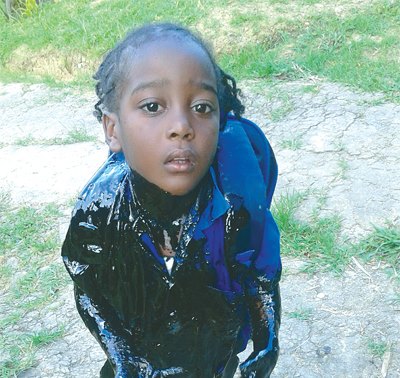 Then, while on his way to school that day, five-year-old Caleb Hart slipped on a narrow bridge leading from his home to the roadway and fell into the oily water.

Luckily for Caleb, the waters were not deep and his father, Junior Jerome, who was walking him to school, was able to quickly fish him out. He was taken for treatment by Petrotrin doctors in Point Fortin and then sent to the Augustus Long Hospital.

Yesterday, angry residents blocked the Guapo Main Road and burnt tyres in protest at the company’s lack of action.

In an interview with the T&T Guardian, Caleb’s aunt Susan Jerome blamed Petrotrin and the Government for her nephew’s near-death experience. She said the accident could have been prevented had the company lived up to its responsibilities.

“We have been complaining for weeks to Petrotrin and it was only when I started to get on with them last week they came and dropped some sand on the concrete bridge,” Jerome said. “I told the Petrotrin man that throwing sand on a concrete bridge will be hazardous to children, that somebody will fall and when somebody get damaged, then they would want to come and clean the oil.

“So said, so done…I want the country to know what it is that people have to put up with on a daily basis.”

She explained why the residents protested, noting La Brea had been stigmatised as protesting for ‘nothing.’

“We didn’t block the road because we want jobs or we want the road fixed, we blocked the road basically because we have been calling on Petrotrin for the past three weeks to clean raw crude oil that is running more than 15 kilometres in a river that a child fell in and they don’t want to come and clean it. They reach so far to tell us don’t let it go viral and don’t involve the media.”

After Caleb’s accident, the company pledged to send out crews to begin the clean-up work but Jerome said yesterday no one was seen until almost 3 pm. Jerome said the stench of the leaking oil had caused numerous health problems among residents.

“There are people living along the riverbank who have gotten coughs, wheezing, rashes and chest pains…this is affecting so many people in so many ways.”

Her neighbour, Natasha Mitchell, who has a newborn son, held up a fistful of prescriptions, stating, “My son is only three months old and all of this is medication I have to buy for him because the scent of the oil real affecting him.”

She said she gave birth to her son by Caesarean (C-)section and was experiencing problems with her stitches.

“I am getting a lot of pain and I feel faint, mostly at night when the stench is overpowering.”

In a release last night, Petrotrin said the source of the leak seemed to be a nearby abandoned oil well. It said a team had visited the area yesterday, met with residents and had also started remedial work and clean-up of the area, which is expected to be completed by next week. The company thanked the residents for their understanding and said it would continue to work with them to ensure the restoration efforts are concluded in a timely manner.