This post is based on an email that was sent and in no way reflects the views and opinions of ''Met'' or Jamaicanmateyangroupie.com. To send in a story send your email to likeacopcar.78@gmail.com
November 7, 2015 8:25 am 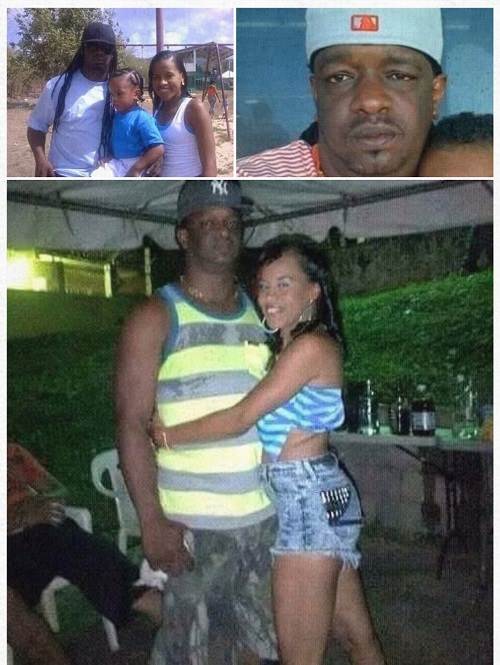 The video caused public outrage but the victim, shown at right with the alleged attacker, refused to press charges after he surrendered to police yesterday.
The 26-year-old woman videotaped receiving a severe beating with a steel object in a video which was circulated on social media yesterday has refused to co-operate with police investigating the incident.

Her refusal has caused investigating officers at the Arouca Police Station to consult with their legal team on whether or not the suspect, an Arouca businessman, could be charged with any offence. With her refusal to file a complaint, the victim has left police with a case that may see the perpetrator of the vicious beating walk free, despite at least seven eyewitnesses to the incident.

While the 49-second clip making the rounds on Facebook shows what seems to be a staggering amount of violence meted out to a petite young woman, the beating allegedly did not stop when the clip ended. The footage was recorded on Thursday. According to eyewitnesses, the beating continued for several minutes longer as the woman lay on the floor being kicked in her head, arms and stomach by the man.

The woman, according to eyewitnesses, had arrived at Nella’s Sports Bar on the Arima Old Road at around 1 pm, where she was having drinks with friends. Two hours later, at exactly 3.08 pm according to a time-stamp on security footage, the man, identified as the father of her child, walked into the bar and started the violent beating.

After the incident, the man lifted the young woman by her clothing and pulled her out of the bar. Less than an hour later, he returned and threatened to assault an employee at the bar after she had called him a coward.

The owner of the bar, who spoke to reporters yesterday, said he was surprised at the attack as he had known the man for a while and had never seen that type of behaviour. He said he had called out to the man to stop but the suspect continued. Having received a leg injury in a car accident last month, the owner said he could not have intervened.

“The only other people in the bar were women so nobody could have safely stopped what was happening,” he added.

However, a source close to the couple claimed the beating was nothing new.

“This isn’t the first time that happened to her. The last time it happened two women interfered and tried to stop him and he ended up beating all three of them,” the source alleged.

“The women are afraid of him though so they won’t talk. She won’t help the police and he will come right back out and the same thing will happen again.”

The couple surrendered to the Arouca Police Station yesterday morning and were both interviewed by police officers up until late yesterday evening. According to police sources, the victim has insisted she did not want police involvement.

In a telephone interview last night, attorney and former police officer Lyndon Leu said the police could only lay charges if the victim gave a statement or if the victim’s medical notes or a statement from the doctor showed the victim admitted to being beaten by her partner.

He said the video would have been enough to arrest and detain the perpetrator for 48 hours but police needed more in order to charge him. Leu, who saw the video on Facebook yesterday, said police could either charge him for a minor offence, which was assault by beating, or possibly a major offence of wounding with intent to cause bodily harm.

He added: “If the police are clever or innovative they can find a way to lay charges but it is still possible that the victim will find a way to sabotage the case when it goes to court. “But as funny as it sounds, she has to tell the police she did not give permission for him to beat her.”

He said police could also look at less obvious crimes to charge the perpetrator with, such as disorderly conduct or possession of a weapon, in the event the victim had refused to give a statement but police got statements from other witnesses.

Leu said, however, that it was common for victims of domestic violence situations to refuse police help. Another attorney, Donna Prowell, agreed that police could charge the perpetrator for assault using a statement from the witness, even if the witness doesn’t want to pursue the case further.

According to Section 26 of the Domestic Violence Act, evidence obtained through a statement is admissable in court if a witness refuses to co-operate.

Where direct oral evidence of a fact would be admissible in any proceedings under this Act, a document containing a statement made by the complainant which forms part of the record compiled by the police and tending to establish that fact, shall be admissible in circumstances where—
(a) The complainant refuses to be sworn as a witness; or
(b) having been sworn as a witness, gives oral evidence which is inconsistent or contradictory to the statement forming part of the police record