This post is based on an email that was sent and in no way reflects the views and opinions of ''Met'' or Jamaicanmateyangroupie.com. To send in a story send your email to likeacopcar.78@gmail.com
November 12, 2015 12:29 pm 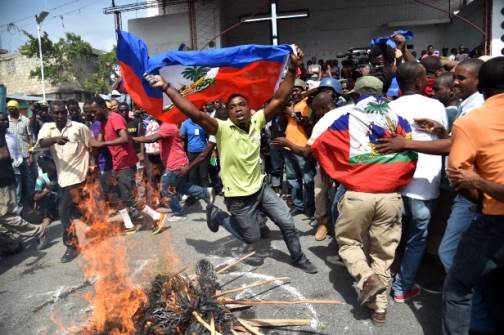 Haitians angered by a series of rapes and robberies in Port-au-Prince burned alive a man they suspected of criminal connections early Thursday in an upscale suburb of the capital.

Hundreds of men marched through Petionville to the menacing rattle of machetes being dragged along the street and chanting slogans in a protest against criminal violence.

The unidentified man was burned to death after being stopped and asked his business in the neighborhood, a witness said.

“It was a little past 1:00 am. The neighbors asked this guy if he knew anyone in the area. He didn’t know anyone and he had a red handkerchief around his ankle: it’s a sign of association with wrongdoers,” said Fritzner Jules, a taxi driver, standing next to the charred corpse.

“The population jumped on this guy, put tires over him, doused him with gasoline and set him on fire,” he said.

The incident followed a series of home invasions in Port-au-Prince in recent weeks in which the victims were sexually assaulted.

“We cannot tolerate these acts: the public has no right to take justice into their own hands,” said police spokesman Frantz Lerebours.

“People must return to their homes or else the police will force them to,” he said.