This post is based on an email that was sent and in no way reflects the views and opinions of ''Met'' or Jamaicanmateyangroupie.com. To send in a story send your email to likeacopcar.78@gmail.com
January 12, 2015 3:16 pm 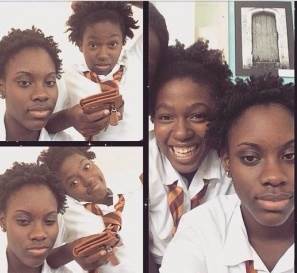 Past students of the famous Harrison College in Barbados have started an online petition protesting the school’s decision to outlaw the ‘twist-out’ hairstyle often worn by girls and women with natural hair.

The school has reportedly said the hairstyle is not appropriate for school.

The issue became a hit on social media after Elva Mary Tudor posted pictures last Thursday of her daughter wearing the ‘offending’ style.

In the caption to the photos, Tudor said her daughter’s hairstyle was considered “flamboyant” and “unsettling”.

She also added that her daughter has been the subject of negative comments.

Tudor said she finds the negativity towards natural hair “sad and backward”.

“We seem to dislike the look of tightly coiled strong hair”, she said.
Meanwhile, in their petition, past students have lambasted the school’s administration for banning the hairstyle.

The school has not commented publicly on the matter.

The petition is accompanied by an open letter to the principal, Juanita Wade, who took over the leadership of the 282-year-old institution in September.

The letter noted that the decision has implications for the ‘identity’ of the students.

“Not just in the Caribbean but wherever young, black women live we are told that our hair is somehow inadequate: it is ‘hard’ or ‘knotty’. It is not straight ‘enough’,”

In the call for the school to rethink its decision, the petitioners also said this needless condemnation of a style of wearing one’s natural hair is harmful and communicates a dangerous message.

The petition has garnered 500 signatures so far.

Meanwhile, the blog, ‘Feminist Conversations on Caribbean Life’ criticised the decision and made reference to Olive Senior’s famous poem Colonial Girls School which dealt with Eurocentrism in Caribbean schools.

According to the post, elite secondary schools in the region share a history of colonialism, racism, sexism, classism and anti-blackness.