This post is based on an email that was sent and in no way reflects the views and opinions of ''Met'' or Jamaicanmateyangroupie.com. To send in a story send your email to likeacopcar.78@gmail.com
June 13, 2013 12:30 pm 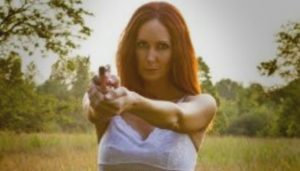 The husband of a pregnant actress, accused of sending poison-laced letters to President Obama and then trying to frame him for the crime, says it’s “heartbreaking” to think that his spouse implicated him, but he harbors no anger and hopes to move on with his life.

“The way I look at it, being angry is a waste of energy,” Nathaniel Richardson told ABC News. “She has done this to herself. She has destroyed my reputation and my life but there’s a way up from this and if I sit here and focus on anger, I can’t focus on getting on with my life.”

Shannon Richardson, 35, initially called the FBI claiming that her husband was the person who had sent a series of letters tainted with small amounts of the toxin ricin to Obama, New York City Mayor Michael Bloomberg and Bloomberg’s top gun-control lobbyist in Washington in late May.

But when investigators looked closer, they arrested Shannon Richardson June 7 at the couple’s home in New Boston, Texas. The actress who played bit roles in movies and on TV shows, including the “Walking Dead,” was charged with mailing a threatening communication to the president. She could face 10 years in federal prison if found guilty.

Shannon Richardson’s attorney said overnight in a statement to ABC News, “I have seen no evidence to even suggest that my client desired to hurt the president or any of the other individuals involved. She is incarcerated for the first time in her life. Her primary concern remains her children and the trauma they are experiencing.”

A detention hearing for Shannon Richardson is scheduled for Friday, court records show, and the government is requesting that she be held without bond, according to The Associated Press.

Nathaniel filed for divorce last week, after Shannon implicated him but before she was arrested.

Shannon has five children ranging in age from 4 to 19 from other relationships, four of whom had been living with the couple, Nathaniel Richardson’s attorney told The Associated Press.

She’s now pregnant with their child.

Richardson contacted authorities May 30 and implicated her husband of almost two years, according to an FBI affidavit.

RELATED: Person of Interest Being Questioned Amid Exclusive Images of Possibly Ricin-Laced Letter to Bloomberg

“I’m sitting there thinking I don’t even know what ricin is,” Nathaniel Richardson said. “I wasn’t even saying it right at first. I was calling it licin. Really, everything I’ve learned about it I’ve learned from [the FBI].”

Richardson claims he didn’t even know who Bloomberg was.

Richardson failed a polygraph test and investigators found inconsistencies in her story, according to the affidavit.

Finally, the affidavit says, in an interview with authorities June 6, Richardson admitted that she had received syringes and lye — a caustic chemical used in making ricin — in the mail; that she had printed the labels for the letters; and that she mailed them.

But she insisted that her husband typed them and “made her” print and send them, the affidavit says.

Richardson was arrested the next day and remains in custody as her husband tries to pick up the pieces and move on with his life.

Nathaniel Richardson says there were no red flags that gave him clues about what his wife was allegedly up to, adding that if he had spotted something, he would’ve “blown the whistle a long time ago.”

“I had theories, she wanted to get her face out there and destroy me. She wanted to be an actress. She really did,” Richardson said.

Shannon Richardson has appeared on television, including a stint as a zombie on “The Walking Dead” and a role in “The Vampire Diaries.”

“It still seems like a bad dream sometimes, that it really didn’t happen,” Nathaniel Richardson added.

Meanwhile, Nathaniel Richardson says there’s nothing left in his marriage to love.

“The person she was wasn’t real,” he said. “Just couldn’t believe it. Heartbreaking.”

The Associated Press contributed to this report.
Also Read.. . .