This post is based on an email that was sent and in no way reflects the views and opinions of ''Met'' or Jamaicanmateyangroupie.com. To send in a story send your email to likeacopcar.78@gmail.com
August 12, 2013 1:35 pm 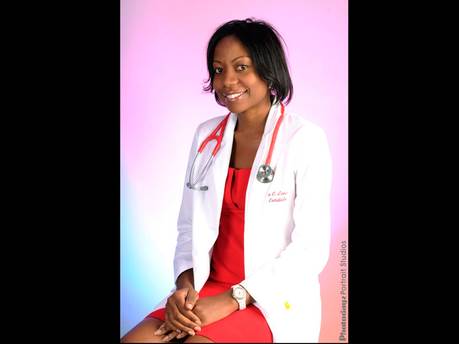 Cardiologist Dr Claudine Lewis has no problem with being called a ‘country girl’. She’s proud that she is from the small district of Dumfries in St James.

The word small fits her stature, but that’s where the connotation ends.

She is one of 16 cardiologists in a country of 2.6 million people and the only expert trained to care for issues affecting the heart at western Jamaica’s largest medical facility – the Cornwall Regional Hospital (CRH).

As early as age three, she was thinking big. “My mother claimed I wanted to become a medical doctor by then and I recall that by primary school I wanted to be a surgeon,” she told Flair over a delicious meal of Negro yams, green bananas, and callaloo and salt fish, at Montego Bay’s The Pelican restaurant.

“The others are practising in the United States,” she said, adding that although they chose to remain there, they continue to be part of a network that assists whenever possible.

Of note is the fact that the recommendation is one cardiologist per 100,000 persons. At 2.6 million people, Jamaica needs to have about 260 to adequately serve its populace.

Inspired and influenced by two of her professors – the late Dr Charles Benbow and Edward Chang – to enter the field of cardiology. After studying for 12 years Lewis returned home to be near her family, particularly her mother, while at the same time filling a three-year void that existed at CRH.

“For three years, the hospital had no cardiologist, so when the then SMO (senior medical officer), Greg Thomas made the offer to me, I gave up a fellowship in Canada, because it was always my intention to come back to MoBay,” she revealed, noting that she had always wanted to work at Cornwall Regional.

Her earliest experience of the hospital was seeing a close childhood friend with congenital heart defect constantly in and out of the medical facility.

On her return to Jamaica, Lewis was given a 1,200-square-foot area, which was converted and enclosed into a cardiac clinic and diagnostic unit. “There we do non-invasive testing, including echocardiograms, as well as stress testing,” she explained.

With heart disease still the number-two killer in the country, Lewis said that of all the admissions to medicine at the hospital, more than half are cardiology related.

The move to build the unit was revolutionary as no other unit of this kind exists in any of the public hospitals in the island. The service is, however, available at the University Hospital of the West Indies.

The same year Lewis opened the cardiology unit at CRH she did a soft opening of her private practice – The Heart Smart Centre – at the Montego Freeport Shopping Centre.

“There was a demand for private cardiology care – even though I was allowed to do a private clinic at Cornwall, the people who could afford it did not want to come to the hospital,” she stated.

Lewis grew up with an ultra-conservative mother and a disciplinarian father who felt there was no obstacle that would stop his daughter’s future.

So, when her mom stopped her from doing the sciences in ninth grade at Mt Alvernia High School, because she felt the realistic career choice was to become a secretary, her father stepped in.

“My mother was very careful in relation to career choices, so when I chose the sciences, such as biology, chemistry and maths, mother came to school and changed them,” said Lewis.

Her mom felt it was more practical to do subjects that would help her in a clerical field. “She felt that I could go to Duff’s Business College for secretarial studies after high school, because they (mom and dad) just couldn’t afford to send me to medical school.”

So, instead of French, Lewis did typewriting, and instead of physics, she did accounts. She failed typewriting. However, she got an A in accounts and passed computer studies. There was nothing that would stop her path to medical school, even if she missed out a few years, which she did. “My father insisted that I do the subjects that I wanted to, because he never thought that there was anything that we couldn’t do.”

She taught herself CXC physics and passed it with a distinction. In those days, that was an absolute prerequisite for medical school.

Today, Lewis has a special interest in managing patients with heart failure, as she finds it very rewarding seeing them return to normal. “I have a lot of patients who do well,” she told Flair.