This post is based on an email that was sent and in no way reflects the views and opinions of ''Met'' or Jamaicanmateyangroupie.com. To send in a story send your email to likeacopcar.78@gmail.com
January 25, 2015 9:16 am 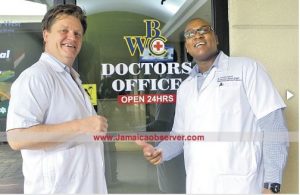 After giving birth to three children, the 33-year-old Montegonian just couldn’t get the pleasure she once experienced during sex.

The woman, who has been married for almost three years, said the tightness in her vagina no longer existed.

Fearing that the lacklustre sex could impact negatively on her marriage, she became worried, and suffered in silence for months.

“It [sex] just didn’t feel the same as before, and I know my husband who is 37 felt the same way about it, even though he said it’s okay. But I know for sure that he just wasn’t getting that feeling like before, just like myself, and so I became very concerned about our marriage,” she told the Jamaica Observer.

But fortunately for her, sometime last year she saw an advertisement in a local newspaper that addressed a surgical procedure called Laser Vaginal Rejuvenation (LVR) that involves the tightening of loose vaginal muscles, being offered by Dr Germaine Spencer at Baywest Wellness Clinic in this resort city.

After much discussion with her husband, who she said was “a bit sceptical”, and consultations with Dr Spencer about the operation, the woman, whose condition is known as vaginal relaxation, decided to go for it.

The procedure, which lasted for less than an hour, was successfully done last April, much to the delight of her husband and herself.

“The surgery was mind boggling. We couldn’t be happier, we are enjoying sex to the maximum…” she shared, as she encouraged women who have loose vaginal muscles to consider doing the procedure.

“I would urge every woman who has that problem to consider doing the surgery. It can save your marriage and make you become less insecure.”

She argued that men are sometimes not getting enough pleasure from sexual intercourse due to vaginal relaxation, but “they will not say it to their partners, instead they go elsewhere”.

She is among five women — four of whom are single — who have so far undergone the roughly one-hour outpatient surgical procedure at the clinic, since it became available there early last year.

According to Dr Spencer, a 35-year-old obstetrician and gynaecologist who pursued a course in vaginoplastic surgery at the Laser Vaginal Rejuvenation Institute of America in Los Angeles last year, the surgical procedure involves decreasing the internal and external vaginal diameters, and effectively enhancing vaginal muscle tone, strength, and control.

The end result, he said, is a marked increase in sexual gratification.

Claiming that he is probably the only surgeon in the English-speaking Caribbean who was trained at the Laser Vaginal Rejuvenation Institute, the former Jamaica College head boy told the Sunday Observer that the main reason he decided to pay the more than $3 million to undergo the three-day training, offered by the renowned Dr David Matlock at the institute last year, was to “ease the pain” of many women who are suffering from vaginal relaxation.

“Women have been complaining to me that the vagina does not feel right… so this [Laser Vaginal Rejuvenation] is a tool now that can bring back the love in marriage,” he emphasised.

“In addition, the morbidity and mortality associated with cancer care can get you down as a physician, because there is so much you can do with so much of the limited resources available here in Jamaica, so I really needed something that would give me the drive.”

Sporting a broad smile, a passionate Dr Spencer recalled the experience of the first patient who underwent the procedure at his clinic.

“She came in and said ‘doctor, the relationship not going too well, and so I have a big problem. I have this boyfriend and I am tired of the verbal abuse about the looseness of my vagina. I am depressed… because of lack of sexual gratification, I need help’”, Dr Spencer recalled.

According to Dr Spencer, a few weeks after the surgery, the 28-year-old woman, who has one child, came back to his office smiling.

That is the reaction, he said, of all the women who have each paid anywhere between US$2,500 and US$3,000 for the procedure.

But the cost, he argued, pales when compared to the amount of sexual gratification that can be had after the surgery.

“Right now, my patients are happy. Everywhere they see me, they hug me up and say ‘doctor, the thing sort out, it is the best thing that could ever happen to me. Doc, you are the best, what you have done is the best thing since slide bread’”, Dr Spencer said, adding that “them [patients] love me like cook food”.

This journalist was left in awe when he was shown photos of a vagina, which the doctor said were taken before and after the surgery.

“You see how it looks nice now? Do you see how it is immaculate and pretty? Can you imagine then, how it feels?” the obviously satisfied Dr Spencer asked, referring to a photograph that he said was taken after the procedure, as he and this journalist looked closely at the images on his smartphone.

He told the Sunday Observer that women who undertake the procedure are usually able to resume sexual intercourse between four and six weeks.

But sex therapist Dr Sidney McGill said that he would only recommend the procedure to women whose vaginas have lost most of the elasticity.

“If the vagina has lost most of its elasticity because the woman has a lot of children, then I can see a woman wanting to take the chance… a very large vagina that is not pleasurable to any partner, I could see her wanting to opt for that. But there is more to it than tightening up the vagina, and the concern I have is that once you are going to do any cutting in the vaginal area the tissues are not going to stretch after healing, so if the vagina is reduced to contain a certain sized penis, and the man is a lifelong partner, then fine, but if the woman is going to have multiple partners then it can pose a problem because the vagina won’t be able to stretch that much, so it will be uncomfortable in the areas where the incisions took place,” Dr McGill explained.

Dr Spencer, who was born and grew up in Kingston, completed his post-graduate training at the University of the West Indies, St Augustine campus in Trinidad in 2009 at the top of his class, before pursuing studies in oncology and gynaecology in India.

In 2010, he returned to the island and worked at the State-run Savanna-la-Mar General Hospital before setting up private practice in Westmoreland.