This post is based on an email that was sent and in no way reflects the views and opinions of ''Met'' or Jamaicanmateyangroupie.com. To send in a story send your email to likeacopcar.78@gmail.com
June 6, 2013 9:11 am

THE HAUNTED HOUSE COMES TO AN END

SANTA CRUZ, St Elizabeth — After weeks of mysterious burnings and reports of people being hit with stones thrown by “invisible” hands, a pur-ported “haunted house” was destroyed by fire at Rose Hall district, in south east St Elizabeth yesterday.

Reports pieced together from residents and firemen at the Junction Fire Station said the fire started shortly before midday and quickly engulfed the five-apartment building. 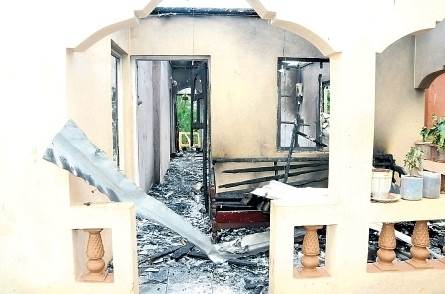 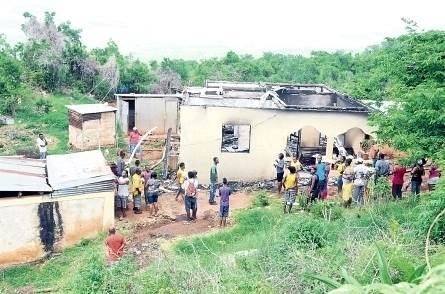 Distraught householders said they lost “everything”. The fire department esti-mated the total loss at around $15 million. Family members, who yesterday steadfastly insisted that their names be kept out of news reports, confirmed that the house was not insured.

The Junction police confirmed late yesterday that they were investigating the incident.

A 42-year-old daughter of the householders said any material assistance would be welcomed “because the house burn down and we lose everything”.

Fire personnel said that on their arrival the house was already “engulfed”. They were able to save an old building, almost adjoining, described by relatives and neighbours as an “old outside kitchen”. Firemen described the cause of the fire as “unknown”.

But family members and neighbours were in no doubt that it was merely a continuation of the mysterious happenings occurring sporadically since April 20. They claim several people have been hit with stones and small fires had, on occasion, destroyed furniture, including mattresses and settee chairs. They insist that the cause is “not natural” and is “duppy business”.

The daughter told the Jamaica Observer that in the latest incident, family members found themselves being hit by stones on occasions Monday night to early Tuesday morning.

It was as if the stones were “coming out of the ceiling”, she said. She showed this reporter bruises on her neck and arms as evidence of being hit.

She claimed they left the house yesterday, with some family members hoping to go to the doctor only to hear that the house was on fire.

“Pure fire mi see a bun … the whole of the top of the house pure fire,” a neighbour, who claimed to have been early on the scene, said.

When the Observer team arrived in mid-afternoon, only the blackened walls of the burnt-out house remained with scores of people from surrounding communities visiting to see for themselves. Twisted metal in what was said to be the kitchen was identified by neighbours as the remains of appliances, including fridge and stove. Saddest of all, perhaps, were the remains of school books burnt to cinder.

The daughter who spoke to the Observer, angrily rejected allegations that family members had been involved in demonism and spiritualism of any form.

“We not in no de Laurence business, we don’t deal inna obeah, we don’t know anything bout dem thing deh… I have to work too hard to tek my money give obeah man,” she said. “If we did owe de Laurence money, wi nuh woulda pay it back long time from the first stone dem start throw? But wi don’t know who to go to because wi don’t owe nobody and wi don’t do nobody nuttin,” she said.

She confirmed that her 70-year-old mother had been taken to the doctor. “She suffering from diabetes and high blood pressure, and all this is too much,” she said.

The daughter said that after initially dismissing reports that “duppies” (ghosts) were involved, she changed her opinion weeks ago, when she saw a window on fire with no obvious source. “Mi see it fi myself,” she said.