This post is based on an email that was sent and in no way reflects the views and opinions of ''Met'' or Jamaicanmateyangroupie.com. To send in a story send your email to likeacopcar.78@gmail.com
February 5, 2016 7:23 am

RESIDENTS of Three Hills in St Mary were left in shock yesterday after a mother and her two children were found dead at their home in a suspected case of carbon monoxide poisoning.

The bodies of 37-year-old Charla Thompson-Young, her 12-year-old son Brandon Young and her daughter Leslie-Ann Young, age four, were found at approximately 6:00 am by one of their relatives.

Residents told the Jamaica Observer yesterday that the family had resorted to using a generator after the electricity tripped out for several hours.

Relatives and neighbours who gathered at the home — where a strong smell of the fumes was still present — rued not having found out earlier that something was wrong at the house. 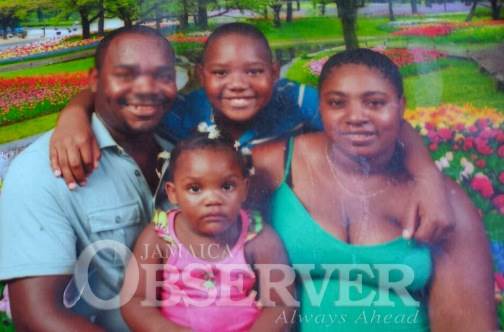 Young’s sister-in-law, Phoenia Young, was especially sad — having aborted a plan to get something done at the Thompson-Young’s house at about 11:00 pm on Wednesday night.
“I have to live with that,” she said yesterday, noting that she was concerned about Thompson-Young’s husband of 12 years who was working overseas. He was expected to return to the island last night.

She said Thompson-Young and her children returned to the island last month after spending their Christmas vacation overseas.

“She was very quiet. She nuh trouble nobody. She was a family person, genuine,” said Young of her sister-in-law.

She said the children were very loving. Brandon was in grade seven at the St Mary High School, while his sister attended a basic school in the community.

According to Young, it was not the first time Thompson-Young was using the generator, but that it was normally placed outside.

“Maybe it was too heavy so she couldn’t move it,” Young theorised.

Other people said the woman probably thought it was safe to keep it indoors as it was in an area far from their rooms.

“It is very dangerous; they need to educate persons about this. You cannot leave a generator on inside, especially if you are going to sleep. It emits the carbon monoxide and cuts off your oxygen. Even if it is in another room, it will spread to the other areas of the house. Your body becomes very weak and you slowly die,” one mechanic said of the dire effects of being exposed to carbon monoxide.

Meanwhile, Young said there was evidence that Thompson-Young was trying to open the house, but was too weak.

“She opened the door because it looked like she was trying to get out and fell back on bed,” Young said.

Thompson-Young’s younger brother Dwight said his mother was not told of the tragedy on Thursday because of her illness.

“She is just recovering from a stroke, so we can’t tell her yet,” he said.