This post is based on an email that was sent and in no way reflects the views and opinions of ''Met'' or Jamaicanmateyangroupie.com. To send in a story send your email to likeacopcar.78@gmail.com
August 28, 2013 10:07 am

SOMETHING NAH ADD UP WID DI US AND SNOWDEN NOW.. 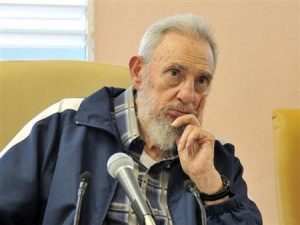 Former Cuban leader Fidel Castro sits at the inauguration of the Vilma Espin Guillois school in Havana in this picture taken on April 9, 2013, and released by Cuban website Cubadebate on April 11, 2013. REUTERS/Courtesy of Cubadebate/Revolution Studios/Handout

(Reuters) – Retired Cuban president Fidel Castro blasted on Wednesday a report in a Russian newspaper that his country buckled to U.S. pressure and blocked former U.S. spy agency contractor Edward Snowden from traveling through Cuba to exile in Latin America.

Castro, who ceded power to his brother Raul in 2006, and is rarely seen or heard from in public, said the article in the Kommersant newspaper on Monday was a “lie” and “libel.”

Castro, in a column on various international issues, from Syria and Egypt to robots doing police work and Snowden, and carried by official media, hailed Snowden and lashed out at U.S. spying as repugnant.

“It is obvious that the United States will always try to pressure Cuba … but not for nothing has (Cuba) resisted and defended itself without a truce for 54 years and will continue to do so for as long as necessary,” Castro wrote.

Snowden, who is wanted in the United States for leaking details of U.S. government surveillance programs, had planned to fly to Havana from Moscow’s Sheremetyevo airport a day after arriving from Hong Kong on June 23.

But Snowden, who eventually accepted a year’s asylum in Russia after spending nearly six weeks at Sheremetyevo, did not show up for the flight although he had been allocated a seat.

Citing several sources, including one close to the U.S. State Department, Kommersant newspaper said the reason was that at the last minute Cuba told officials to stop Snowden from boarding the Aeroflot flight.

It said Cuba had changed its mind after pressure by the United States, which wants to try Snowden on espionage charges.

Castro, in his column, blasted Kommersant as a well known “counter-revolutionary” and “mercenary” newspaper.

“I admire the courageous and just declarations of Snowden,” Castro wrote.

“In my opinion, he has rendered a service to the world having revealed the repugnantly dishonest policy of the powerful empire that is lying and deceiving the world,” Castro continued.

According to the Russian newspaper, Havana informed Moscow that it would refuse the landing of an Aeroflot plane should Edward Snowden be on board.

Castro did not explain why Snowden skipped the Aeroflot flight.