This post is based on an email that was sent and in no way reflects the views and opinions of ''Met'' or Jamaicanmateyangroupie.com. To send in a story send your email to likeacopcar.78@gmail.com
June 11, 2014 7:15 am 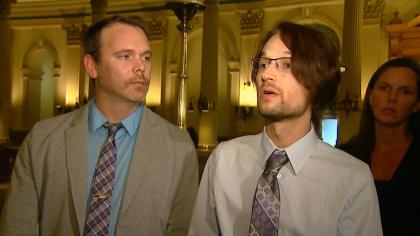 DENVER (CBS4) – The owner of a bakery in Lakewood said he will no longer sell wedding cakes after the Colorado Civil Rights Commission ruled he did discriminate against a gay couple when he refused to sell them a cake.
Jack Phillips owns Masterpiece Cakeshop. In 2012, David Mullins and Charlie Craig went to the shop to order a cake for their upcoming wedding reception. They planned to marry in Massachusetts and have a reception in Colorado.
Charlie Craig, left, and David Mullins (credit: CBS4)
Charlie Craig, left, and David Mullins (credit: CBS4)
Phillips said he doesn’t believe in gay marriage and he refused to sell them a cake.
“We would close down the bakery before we would complicate our beliefs,” Phillips said after the hearing. Phillips also admitted he had refused service to other same-sex couples.
A judge previously ruled a business owner cannot refuse service to a customer on the basis of sexual orientation. Phillips appealed to the commission, but it upheld the decision.
That prompted Phillips to decide he would no longer make any wedding cakes. He said he would be fine selling cupcakes for a birthday party for someone who is gay but added, “I don’t want to participate in a same-sex wedding.”
The commission also ordered the baker to submit quarterly reports about the customers he refuses to serve and retrain employees to serve everyone.
For the couple, they said they always believed they were in the right and it was important to pursue the case for future customers.
“We’ve already been discriminated there,” Mullins said. “We’ve already been treated badly.
“The next time a gay couple wanders in there asking for a wedding cake, they won’t have the experience we had.
“They will have a responsible experience and leave feeling respected.”