This post is based on an email that was sent and in no way reflects the views and opinions of ''Met'' or Jamaicanmateyangroupie.com. To send in a story send your email to likeacopcar.78@gmail.com
January 23, 2016 8:24 am 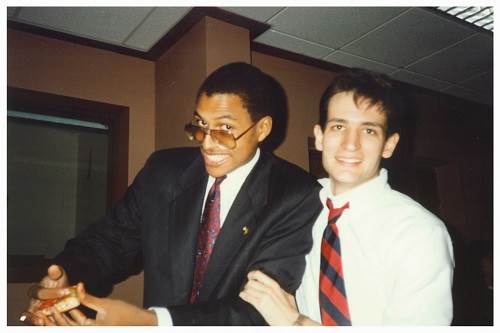 David Panton, left, with Ted Cruz while they were students at Princeton University. (Daedre Levine)
KINGSTON, Jamaica — The ambitious young men sat for hours at a restaurant here to map out plans for a business venture that could make them millions.

In a group that included three Jamaican entrepreneurs, one participant seemed out of place — a 27-year-old former U.S. Supreme Court law clerk of Cuban descent who was visiting from Washington.

Ted Cruz had been invited by his roommate from Princeton and Harvard Law, David Panton, who was eager for the group to win the rights to manage a new Caribbean-focused investment enterprise launched by one of the island’s most prominent executives.

The idea was modeled after U.S. private equity companies that made fortunes by using investor dollars to remake underperforming companies. The Caribbean concept came with a twist — the investor dollars would be drawn in part from governments, including from the United States, leveraging funds intended to boost the developing world.

It was an odd fit for Cruz, who as early as high school and college expressed a strong belief in limited government. But the plan held potential for big profits. And Cruz was welcomed by Panton’s fellow Jamaican partners as a skilled negotiator well suited to help hone their pitch for managing the new firm.

“A good devil’s advocate,” said Jeffrey Hall, one of the partners at the meeting.

With Cruz’s help, they won the right to control what they hoped would be a $150 million fund. The firm, founded in 1998, lost its contract within five years, in part because of a dispute over an investment decision, and was soon shuttered.

Nevertheless, it provided a tidy sum for Cruz. He initially pitched in $6,000 for start-up costs and exited the partnership shortly before it disintegrated with a payout of $25,000, plus a promise of an additional $75,000 to come later, according to Panton.

The episode is one part of an unusual chapter in Cruz’s life — a foray into Jamaican society and politics amid his otherwise straightforward rise from the Ivy League to coveted clerkships to the U.S. Senate and, now, the top tier of the Republican presidential field.