This post is based on an email that was sent and in no way reflects the views and opinions of ''Met'' or Jamaicanmateyangroupie.com. To send in a story send your email to likeacopcar.78@gmail.com
January 19, 2015 10:22 am 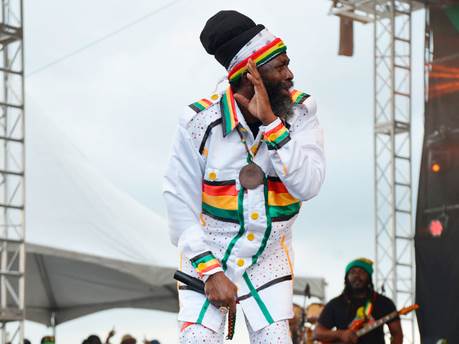 Montego Bay’s Nature was his usual energetic self. Clad in trademark close-fitting clothes, he sang, hopped, skipped and jumped across the stage, whipping his locks to and fro. He strutted on stage at 9:30 p.m. singing his popular World Peace, followed by his cover of Tracy Chapman’s Revolution and Trying Man. Removing his jacket, Nature completed his set with Searching For Love, Preserve Nature and No Guns.

“I don’t know what I am more excited about – his vocal ability or his ‘leg-ability’. What a man can dance!” MC Jennifer ‘Jenni-Jenni’ Small exclaimed.

The first female performer was a svelte Jah9, her powerful voice and stage presence capturing attention. Preacher Man, New Name, Brothers, Avocado and Steamers a Bubble were included in Jah9’s 20-minute set, Jenni-Jenni commenting “me like har spirit, she fearless.”

Norris Man, making his Salute debut, stepped out in full black, upping the night’s tempo with Persistence. His observation “the moment you feeling right” was followed by a commanding performance of Home and Away. Park Your Guns sparked cheers as fans sang along.

Nesbeth started out with Board House, Guns Out This Morning among the songs that also hit the spot. Iba Mahr was smooth as he sang Let Jah Lead The Way, Step Away, Love You Girl, Will I Wait and the much loved Diamond Sox.

Etana was splendid. Reggae, Free, Wrong Address, People Talk, On My Way, a rendition of Marcia Griffiths’ Stepping Out of Babylon, Roots, I Am Not Afraid and Thy Will Be Done were among the songs she performed. Jenni Jenni was as impressed as the audience, commenting “no bag a long talkin’. A so artiste fi wuk stage,”

Junior Kelly’s voice was impeccable. Missing You, done in collaboration with one of the harmony singers, was followed by Dem Wrong, Black Am I, Smile. Kelly then performed Receive and closed with his 2001 hit If Love So Nice.

Bugle was accompanied by two flag bearers, unleashing Anointed to enter the stage. Then came Don’t Blame Life, Journey, What Have I Done To You, What I’m Gonna Do, Heaven and the more recent release Incompatible.

Tony Rebel took patrons back to the 1990s with Fresh Vegetable, continuing with Sweet Jamaica, Teach The Children, Nazarene Vow, Fire and Just Friends, He was followed by Alborosie and later veterans Israel Vibration, who took fans back in time with Why Worry, their 1978 Licks and Kicks and Ball of Fire from their album The Same Song.

In an hour-long set, legendary band Third World performed a slew of their hits, including Reggae Ambassador, Roots With Quality, Forbidden Love, Committed, 1865 (96 Degrees in the Shade), Try Jah Love and Now That We Found Love. Third World took the audience to music school, incorporating chanting and drumming, then Stephen ‘Cat’ Coore playing several well-known songs, including Redemption Song, on the violin.

The group paid tribute to late lead singer William ‘Bunny Ruggs’ Clarke, whom Coore described as a wonderful human being. “The Father has been good to us. He took one and gave one to us,” Coore said in introducing the band’s present lead singer, A.J. Brown.

At 5:42 emcee Cordel Green introduced Tarrus Riley, who put on a stellar showing. His opening Shaka Zulu Pickney was accompanied by a a young man clad as an African warrior, blowing fire. Larger That Life, Lion Paw, Beware, Friend Enemy, his covers of Michael Jackson’s Human Nature and John Legend’s Stay With You and the original Cut it Off were among Riley’s renditions.

Riley also paid tribute to Buju Banton with Not An Easy Road, returning to his material with The Limit (Hurry Up) and Good Girl Gone Bad (recorded with Konshens). He honoured the reggae elders who paved the way for persons like himself.

“When you are a monarch you need no introduction. I will just say two words – Jesse Royal,” was how Green introduced the self-proclaimed ‘Small Axe’,

Royal advised the audience “so long Rastafari call you” and scolded Jamaica’s politicians for keeping citizens under subjugation. Hotter The Battle and Greedy Babylon were aimed at them, Royal said, saying he was not there to provide entertainment, but to enlighten Jamaicans.

“Plant up you marijuana. We a follow di US weh deh 10 steps ahead a we, seen? If we don’t utilise our resources we a go continue suffa. You no see say di government a set we up fi suffa. Dem a meck things tougher. Plant up you herb!” he declared.

Modern Day Judas was another lyrical shot at politicians. “I don’t want to seem aggressive, but they (politicians) have no love fi we,” Jesse said before closing with the uptempo, appropriate This Morning, which had the audience in a dancing frenzy.

I-Wayne was equally impressive, doing Living In Love, Book of Life, and Bleacher before inviting on Jah Mason who did My Princess Gone. I-Wayne continued for another several minutes, then made way for the final performer.

He charged on stage chanting “redda! Burn, burn, burn!” without pausing for a breath. The crowd appeared transfixed and amazed at the 47-year-old’s fitness, agility and amazing breath control as he reeled off hit after hit. Those included Small World and Jah Jah City.

The audience obeyed every command the prophet gave. When Capleton said “hands in the air” up they went; when he ordered persons to wave they did so.

Don’t Dis The Trinity, Consuming, Or Wha, Slew Dem and songs focused on ladies such as Hunt You and Good In Her Clothes were among the many songs in Capleton’s one hour stage stint.