This post is based on an email that was sent and in no way reflects the views and opinions of ''Met'' or Jamaicanmateyangroupie.com. To send in a story send your email to likeacopcar.78@gmail.com
December 18, 2016 9:31 am 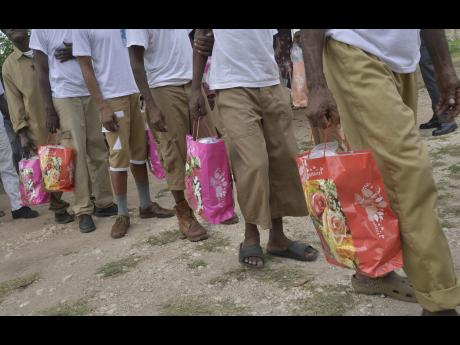 On Thursday, a group of inmates at the Tower Street Adult Correctional Centre, downtown Kingston, was singled out for special treatment by the Lay Magistrates Association of Jamaica, whose members gave them care packages and chatted with some of the men about their experiences in prison.

The men, most of whom have some level of intellectual challenge, have not been getting regular visits and, in most cases, have not had visits from friends or relatives since starting their sentences. Albert Brown, superintendent at the institution, offered some insight into their situation.

“Most of those inmates sitting there are unfit to plead, meaning that they have not been given a sentence because they have not been convicted yet in the courts and, so, because of their psychotic problems, they are here technically, indefinitely. We have inmates who have been here for a very long time, some of them 15 years, 20 years, but have not been getting visits, I think, because most of them would have committed crimes against their family members. So other family members refuse to come and visit them and that is why I think what is happening here today is such a very good gesture,” the superintendent in charge disclosed.

“We beg, we do fundraising and try to come up with the resources so that we can give them those personal-care items that they need. Of course, we have to liaison with the prisons to get approval for the items, which include toilet tissues, soap, rags, slippers – things to keep them hygienic and refresh themselves, so we also provide trousers, T-shirts and slippers,” a member of the lay magistrates team shared with The Gleaner.

Brown pointed out that some of the inmates fÍted developed mental illnesses after being convicted and sentenced, while others are victims of the circumstances of their incarceration.

“You have some who were remanded at the governor general’s pleasure because they were under age (not yet legally adults) at the time when they had committed the crime,” he said.

“We even have cases where adults and juveniles were charged together and the adults are given parole while the then juvenile, now an adult, would not be eligible for parole based on the sentence that he got. So there has to be a process for that one, differently from the ordinary parole,” Brown pointed out.

The United Kingdom Privy Council, in a landmark ruling in the Kurt Mollison case, said it was unconstitutional to detain juveniles at the governor general’s pleasure, arguing that the detention was in contravention of the principle of separation of powers that was enshrined in the Jamaican Constitution as sentencing was a judicial function. Following the ruling, the Government repealed Section 75 of the Juveniles Act, and juveniles convicted of murder were instead detained at the court’s pleasure.

However, most of the inmates who could likely benefit from this ruling have been kept in the dark and left to languish in prison, with no one to bring their cases to light, even if they are now eligible and fit for parole. A lay magistrate who interacted with this group of inmates on Thursday and who has been actively involved in prison ministry shed some light on the impact of this isolation.

“I spoke to one today who is six months shy of his intended day of leaving. He’s been in here 28 years, and in that time, no visitor, no mother, aunt, sister, brother, babymother, nothing. Yet, those in the immediate group that I was speaking with all have children. As a matter of fact, if I add up all the children between the, say, five that were in my little group, you are talking about close to 30 children. So, therefore, you can see that the family ties have been broken, and this is the hurtful part of it, the sad part of it, where the children are denied the presence and wisdom and love and care of their fathers.”