This post is based on an email that was sent and in no way reflects the views and opinions of ''Met'' or Jamaicanmateyangroupie.com. To send in a story send your email to likeacopcar.78@gmail.com
February 8, 2015 9:00 am 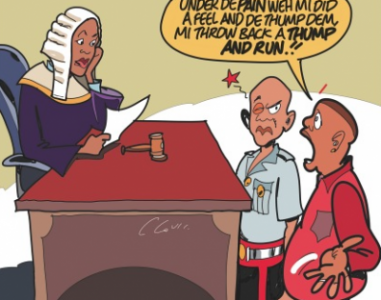 A self-confessed cross-dresser, who claimed the police rescued him from a group of men while he was dressed in a wig and female attire, was last week taken before the Corporate Area Resident Magistrate’s Court for attacking the police and damaging the cop’s uniform.

According to the cross-dresser, Michael Evans, 27, of Manning’s Hill Road in Kingston, he was taken to the station, ridiculed and beaten by the cops who had refused to allow him to contact his mother, resulting in him escaping twice from the station.

However, on Thursday when the matter was mentioned, a liaison officer informed the court that Evans was held on suspicion of robbery.

He told the court that Evans was taken to the New Kingston Police Post to be processed by the Video Investigation Unit and was at the reception area when he escaped twice and ran onto Dominica Drive.

According to the police, while Evans was being subdued he physically attacked the police officers and behaved in a manner that drew the attention of a large crowd.

It was also reported that Evans, while he was being arrested, tore the pants of one of the officers and was subsequently charged with disorderly conduct, assaulting a constable, malicious destruction of property, escaping custody and resisting arrest.

On Wednesday when Evans appeared in court he pleaded guilty to the charges but complained to the magistrate that he was mocked and beaten by the police officers.

Evans, in explaining his story to the magistrate, said that on the day in question he had a delivery to make for his mother who operates a business and went on the road dressed in his wig.

“When I reach Devon House some men who wipe car glass saw me and threatened to kill me cause I had on my wig,” he said.

Evans said that two police officers came to his assistance, but told him that they were going to take him to the station.

However, he said that when he got there the officers started to ridicule him because of the way he was dressed and he ran away from the station twice.

“I asked them for a call to contact my mother and they did not give me, so I ran away to get their attention and for them to allow me to call my mother,” he said.

“But the officers carry me back to the station and start to call me names and the “B” word and then start hit me,” Evans added.

“So when the officers came for you, how did you behave?” Senior Resident Magistrate Judith Pusey asked.

“I just kept myself to myself,” he replied.

“They step in my face three times,” Evans also told the magistrate.

RM Pusey then turned to the liaison officer and asked him what had transpired.

“He was dressed in a wig, in female clothing, and he ran out of the station. When the police went for him, he kicked at the officer and his foot hooked in the officer’s pants and tore it,” the officer replied.

“So what a must do with you now?” the magistrate asked Evans. “You don’t think you should go to prison for it.”

Evans, in response, said: “I have a girlfriend; I have a family. They don’t know my background.”

He added: “Because of the way I was present [dressed] they were making a mockery out of me and if I am supposed to be sentenced then I have to accept it.”

RM Pusey, before remanding Evans for sentence on the following day, said: “I can just imagine what went on at the station, based on what he said.”

On Thursday when Evans appeared in court he was ordered to pay $10,000 or serve six months for assaulting the police, $5,000 or six months each for malicious destruction of property, and escaping police custody, $2000 or 10 days for resisting arrest, and $1,000 or 10 days for disorderly conduct.

A conductor appeared before the court for punching a police constable who, he claimed, had punched him several times in anger after he referred to the policeman as “crosses”.

In addition to the charge of unlawful wounding, Errol Doughma was also brought before the court on a second charge of assault, for attacking another cop.

The incident occurred at the bus lay-by in front of Mandela Park in Half-Way-Tree, St Andrew.

On Wednesday when Doughma appeared in court, he admitted to punching the constable but explained to RM Pusey that he did so while the cop was raining blows on him.

Doughma, before offering his explanation, told the court that he worked on a “hot bus” that was popular because of the speed with which it transports its passengers.

Doughma then told the magistrate that on the day in question he was inside the bus, which had just arrived at the lay-by, when the policeman boarded the vehicle and told him to empty the bus.

“Him tell mi fi empty de bus, but everybody siddung and nah move, so him tell mi fi tell de people dem fi come off, but mi couldn’t hold dem and tek dem off,” he said.

The magistrate asked Doughma if his bus had disregarded the bus lay-by rule, which stipulates that a bus, upon entering should join the back of the queue and allow the bus at the front to load.

“Mi let off at the back but people see de bus and jump on,” he answered.

Doughma said the cop pulled the door, resulting in the lock coming off. At that point the conductor said he told the cop: “Yuh know yuh come een like some crosses.”

“You tell the officer that?” RM Pusey asked.

“Him den turn roun, push up him chest pon mi and chuck mi and mi drop and den when mi get up him start punch mi,” Doughma said.

“Under de pain weh mi did a feel and de thump dem, mi throw back a thump and run,” he said, adding that he was chased by other cops and held.

The magistrate, after listening to Doughma’s story, told him that he should have dealt with the situation in a different manner and that he had no authority to assault the officer.

“A soft answer turneth away wrath,” she said. “You can’t look at the good officer and call him crosses; what you expect him to do, turn around and fall in love with you?”

RM Pusey, at the same time, told Doughma that the policeman had no right to punch him, but that he could have lodged a complaint against the cop.

“If the officer hit you unlawfully, take a selfie. If he broke off your lock, take out your phone and take a picture, ’cause if he acted unlawfully I would punish him,” she said.

“Two wrongs don’t make a right,” RM Pusey told Doughma before she fined him $25,000 for the charge of unlawful wounding.

A no-order ruling was made on the other charge and the fine, if not paid, will attract a six-month sentence.

A domestic helper, who reportedly confessed to burning down the home she shared with her lover following an argument, was remanded for psychiatric evaluation.

Carlene Smellie, 33, of Mount Ogle, St Andrew, was taken into custody and charged with arson after she surrendered to the police following the blaze.

The fire, which destroyed a three-bedroom house in Mount Ogle, occurred on January 13.

Smellie and her lover had occupied one section of the house while another person lived in the other.

According to Smellie’s housemate in her statement, on January 26 she got home from work in the evening and overheard Smellie saying loudly in her room, “Mi a go kill Chris and burn down the house!”

The complainant said she never took the threat seriously and the following morning left the house for work. However, she said that about 2:30 pm that day, while she was at work she got a call saying that her house was on fire.

According to the complainant, she lost over $500,000 worth of goods in the fire.

Another witness, in her statement, reported that about 2:30 pm on the same day she was talking to Chris, who is Smellie’s companion, when they saw her run from the house with a suitcase and a small bag and got onto a bus.

The witness said shortly after she noticed smoke coming from the house.

Following the incident, Smellie turned herself over to the police and told them that she had set fire to the house.

On Wednesday when she appeared in court, Smellie looked as if she was in a daze and was remanded for psychiatric evaluation.

She is scheduled to return to court on February 11.