This post is based on an email that was sent and in no way reflects the views and opinions of ''Met'' or Jamaicanmateyangroupie.com. To send in a story send your email to likeacopcar.78@gmail.com
December 11, 2015 8:37 am 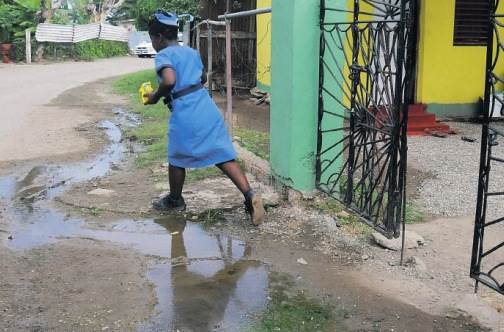 The residents told the Jamaica Observer that two pipes burst two months ago — one in a section of the community deemed to be a staunch supporter of the ruling People’s National Party (PNP) and in Mopen Lane, which is believed to be aligned to the Jamaica Labour Party (JLP).

According to the affected residents, Councillor Peter Davis (South Old Harbour Division) saw to it that the pipe in the PNP section of the area was repaired, while not doing the same for their section.

“We told him about it and he said he would deal with it. That hasn’t been done yet,” a resident told the Jamaica Observer on Wednesday.

“He knows we are JLP down here, that’s why it’s not fixed,” another resident claimed.
According to this resident, follow-up attempts to contact Davis on the issue bore no fruit.

Repeated attempts by the

Observer between Wednesday and yesterday to reach the councillor on a cellphone number provided by a relative of his, and via another number on a St Catherine Parish Council website, proved futile.

The residents complained that whenever the water pressure is high, their front yard is filled with water and entering their premises is made difficult.

Observer saw evidence of the flooding during a visit to the area on Wednesday.

Water could also be seen running in front of the gate of the yard, which was muddy and greenish.