This post is based on an email that was sent and in no way reflects the views and opinions of ''Met'' or Jamaicanmateyangroupie.com. To send in a story send your email to likeacopcar.78@gmail.com
December 6, 2015 10:19 am 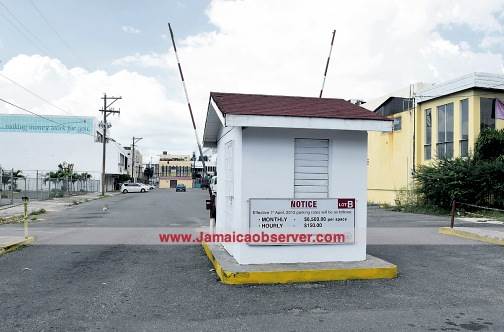 FOR some motorists, free parking isn’t always the easiest task in the business hub of New Kingston, especially on the weekends.

With a majority of the car parks closed on the weekends, motorists sometimes have to drive around the vicinity, struggling to find a parking spot on Knutsford Boulevard — the main avenue — to leave their vehicles.

Others find it not so difficult, but it often comes at a cost; one which is not charged by the government organisation — the Kingston and St Andrew Corporation (KSAC) — the only entity authorised to collect for parking in the area outside of private operators. In fact, according to the commercial service manager, Gary Robotham, “The KSAC does not charge for parking on the weekends.”

A Jamaica Observer investigation recently uncovered that, though the KSAC does not collect on the weekend, criminals have been using the parking lots to earn revenue.

“We have unscrupulous persons who from time to time charge or attempt to charge persons for parking,” the KSAC official told the Sunday Observer. “We have time and again had discussions with the New Kingston Police post and they have done their own routine patrols to deter these persons from such activities, but it was part of the ongoing issues which we have in the society,” he continued.
Upon entering the parking garage on St Lucia Avenue across from the Insurance Company of the West Indies, (ICWI) building last Sunday, the Sunday Observer was told that in order to park, “bills fifty” ($150), as the supposed parking attendant described it, was required. Intrigued and out of patience, the reporter obliged and was then assured that the vehicle would be very well protected.

The KSAC operates six parking lots in New Kingston, some of which are leased to private companies, which in turn may collect for parking. Outside of these lots, there is no charge to park in these areas on the weekend.

“We give free parking on the weekends for the parking lots. You have one parking lot which is leased to an entertainment company which they do patronage for, I think, the Quad (nightclub), but all the others are free (on the weekend),” Robotham said.

But, according to a police officer from the New Kingston police post, and the Quad’s Facebook page, the night club has been closed since October and the facilities relocated to Constant Spring.

The officer, who denied awareness of the operations when questioned, speculated that the persons who were operating the parking lots for Quad may have continued to do so despite the business’ relocation.

have only been opened for business on Mondays to Saturdays and not Sundays — the night the Sunday Observer visited the parking lot and was told to pay for parking.

Although the police initially denied knowledge of this practice, the actions are not new to patronss seeking parking in New Kingston.

Stephen Lewis, who works in the area, told the Sunday Observer that he has had numerous encounters with the unlawful parking attendees.

“The run-in I had the other day was when I tried to park by Quad parking lot, which is free,” he said.

“What I was told by one of them is that the parking lot is under new management when they are there, so anything that normally applies in the normal operation of the business doesn’t apply now,” he continued.

He said that, on first encounter, which happened in the early evening hours during the week, the men were willing to negotiate the cost with him as he had decided to leave and find parking elsewhere.

“If you’re not firm with these people they will have their way, especially if they believe you don’t know the operations or the parking”, he added.

According to Robotham, the KSAC car parks are opened between 8:00 and 4:00 on weekdays and charges $150 per hour or part thereof. He reiterated that night operators are acting illegally and discouraged the public from encouraging their behaviour.

“Part of the dynamics, though, is because most of our lots other companies have to actually access through our parking lots to get to their business places, we can’t actually close them. Some companies’ employees on weekends access our lots to go to like Barita and some of the other companies that have even their own parking lots in our parking lots which can’t allow us to close,” the KSAC official noted, as he sought to explain why the lots weren’t closed in some cases.

He said that motorists should ensure that they get their tickets and added that attendants are almost always in uniform and all have identification cards.

“We have to use this medium, too, to inform the users of the car park to ensure that just like when they take the bus you get your tickets because that ultimately is your proof of payment,” he said.

The perpetrators according to the officer can be arrested and charged for obtaining money by means of false representation or extortion.

Upon receiving information from the Sunday Observer, the police organised a mechanism to ascertain whether the reports were true. The investigation, according to the officer, resulted in the arrest of a suspect.

“I went there last night and we took a man into custody. He wasn’t collecting at the time, but he had blocked the entrance to the lot and looked like he was going to solicit. He was searched and charged with possession of a harmful weapon as he had two knives on him,” he noted.