This post is based on an email that was sent and in no way reflects the views and opinions of ''Met'' or Jamaicanmateyangroupie.com. To send in a story send your email to likeacopcar.78@gmail.com
September 12, 2014 10:38 am 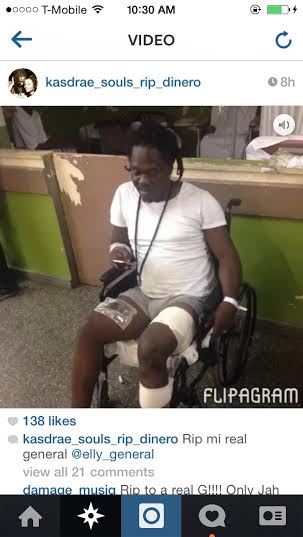 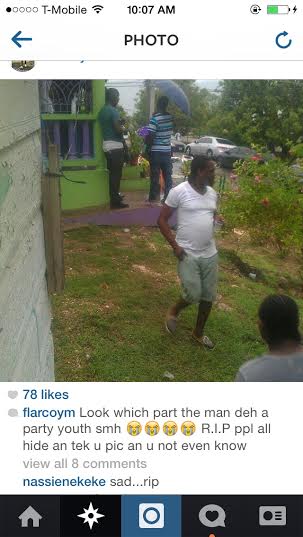 Live by gun die by the gun

Now he is put to good works, pushing up daisies!!!

Good riddance, what took them so long, it should have been done a long time ago, if it was the cops that dispatch him, INDICOM would be all over them like white on rice!!!.

Is there any crying coming from the community that a good youth was killed in cold blood?.

Instead of burying things like that, there should be an isolated area on top of some rocks, to drop off the carcass for the johncrow!!!

You soon hear seh him a good yute, him to give de pikney dem lunch moni

mhmmm
you live to buy the gun, live by the gun, die by the gun!
Only hope the injured were innocent and make a full physical and emotional recovery

THERE IS A GOD, WHAT GOES AROUND COMES AROUND. GOD BLESS MR. CHIN AND COOCS, ENOUGH SAID.

One of the fortunate ones. He lived to the ripe old age of thirty one.

He should have been aborted by his mother, good riddance. Bye! Bye!

No tears from me. He was a murdering bastard . He will burn in hell . I don’t know of the others that got shot but if they are in that gang I hope they won’t recover. My best friend was killed by him and not one thing was done. I likes this news. We won’t have to support him feed him nothing shasta all gone

I am sorry to hear this happened to you.

Thank you LOVE. No more evil thoughts about him

It would have been better if he were a quadriplegia . At least he would have suffer the the living consequences of his actions with regrets and torment. Death is too easy for him.

i c your point

I have read all you guys comments and it’s sad but true that he died and there isn’t a sorrow that came to my heart ….And I am speaking as his family member….Sorry for your lost

Good for him. That’s what he gets for having ties to criminality.

if you live by the gun you die by the gun ( die young to ) simple as that , they have heard this a million times now and still continue. their motto is live rich or die trying n in the end it wasnt worth it all .
14

yep he did…DON, dead over night

Jamaican no know wah dem want. If someone wasn’t investigating the police it would be a problem, now they are its still a problem. Wah wi really want?

I know what I have wanted for 6 yrs that bastard dead. Prayers were finely heard on this one. We can’t live as a nation when dogs like this rob your family/friends of life. It won’t stop here they will kill each other off. Let them. Just don’t want innocent bystanders killed

Kris Lemonius peejay • a day ago

Never heard you so passionate about a topic before, its obvious that this one hit home with you…..i can just imagine. Hold the faith sis, karma has done its work

peejay Kris Lemonius • a day ago

Kris Yes it hit home too close. But with karma striking him down the saying go.s I am free of that hate.

sis dont you worry boiut them.. they are all going die like the dogs they are

SIS I don’t worry no more let them kill off each other. Not our innocent citizens for WE have been plagge,d too long with this ronche murders.
•

Don’t worry with him, he is a police or their defender…he don’t want them investigated.

Everyday there’s someone bashing INDECOM. it is so ironic that the majority of the people (usually poor) that bash the organisations are the same ones that demonstrate against police brutality and excesses. There is now an independent body to investigate the police and they’re still not satisfied. Don’t they realise ,that to allow the police to investigate themselves is tantamount to the mongoose guarding the hen house?

This guys came to my house almost everyday and never knew who it was until know….jah know…he was a changed man…he is always smiling when he comes around…and i dont live in salt spring either…i live in a good community and thats where he lived as well…

peejay Michael Fray • a day ago

the devil in sheeps clothing

Has he ever been convicted by a court of law or are all these accusations which have never been proven.

this is jamaica my friend.

reggaeembasador hamlet • a day ago

The man was a damn murderer, one of the worst type, he was also the leader of the stone crusher gang.

Good riddance. By any means necessary

That’s The Same Way He And His Cronies Have Been Murdering Others. A fitting end!

sassa Man from yard • 2 days ago

mooney65 Man from yard • a day ago

It’s that bad? I don’t see an option to remove the picture though.

Go to google ipetitions, put in to reintroduce or reinstate capital punishment in Jamaica sign the petition, and spread the word to restore the death penalty in Jamaica. Tell your friends, families , church members, and who ever you meet about the site and petitions. Help to change the present situation in Jamaica, you all have the power in your signatures.

Go to I petition dot come and search for ‘to reintroduce or reinstate capital punishment in Jamaica’ which will take you to the page where you can sign the petition. Please tell everyone you meet, including your family and friends, church members etc. We need over 15000 signatures for this petition, each signature will represent a victim who lost his or her life to criminal activities in Jamaica over the last ten years.

Good News,people of Salt Spring ,they are the ones always hidding the fugitives.

those bastard ruin my family and friends lives,they killed my sister boyfriend inside his house as he try to protect them from those monster….
and rape my friend and her daughter in the same night and they got away with it,their gang invade the community…

reggaeembasador Winston Warren • a day ago

Sorry my friend for your loss, but he has payed the ultimate price, unfortunately there are more like him all around us. I moved from salt spring at the right time in the early 90s, just before the miguel jarrett gang exploded and it has not been the same since.

peejay Winston Warren • a day ago

I carried the hate of this man for yr.s, I know exactly how you fell. With his death I am free of the personal hate. Right after Orville.s friends sneaked me away. I had Orvilles blood on me I never mention it but cry tears every night for over 6 yrs. I hope you can be free of the hate also. I feel like a dead weight was lifted from my heart. For I know when they kicked the door in they would have raped me. Now I know he didn’t die in vain protecting me. I can pray for you and your loved ones.

you are a very brave woman, my prayers to you and your family.

You live by the gun you die by the gun. What a nice way to go out. Without the police have to be implicated.

wow! was in montego bay 20 yrs ago, and i can’t believe this is the same place they’re talking about.

when i was there the people were so together and loving, for that matter i’ve never seen anything like it, it was like they were all related and had a strong family bond, and they all looked out for each other.

when i told them i was on my was to kingston they told me not to go because kingston was full of crime, but i loved kingston way more than country so i went anyway, and stayed for a while.

it’s amazing how black people just made a total 180, it’s almost like magic where some warlock seduce us to become blood thirsty animals when our fore parents were nothing like that.

the same thing happened in trinidad. when i was there as a boy there was no such thing as gun shooting, chopping and stabbings yes, but no one had guns to turn it on anyone, now trinidad have more gun than haiti. what a shame.

ELDON CALVERT DESERVE ALL HE GOT!!! NOT A TEARS FI HIM.. HE HAVE PUT SO MANY FAMILY IN PAIN, SORROW, NIGHTMARE, SLEEPLESS NIGHT. ELDON CALVERT LIVED TOO LONG. HE WAS AND STILL IS THE MOST WANTED MAN AND KNOWN GUN MAN IN JAMAICA AND HE IS WALKING THE STREETS OF MONTEGO BAY.. NOW HIS FAMILY GET TO FEEL WHAT A LOT OF FAMILY BEEN THROUGH FOR THE PASS 8-10 YRS. ELDON CALVERT MASH UP SALT SPRING AND MONTEGO BAY. HE HAVE MESS UP SOOO MANY YOUNG PEOPLE LIVES.. HE TOOK FATHERS, MOTHERS, SISTER, BROTHERRRRSSS, COUSIN, FRIENDS FROM SO MANY PEOPLE. HE WHEN OUT TOO EASY!!! #GOODFIHIM

Badman a do Poh’leece wuk!

gunman a do police work

Him just a dead

I have read all you guys comments and it’s sad but true that he died and there isn’t a sorrow that came to my heart ….And I am speaking as his family member