This post is based on an email that was sent and in no way reflects the views and opinions of ''Met'' or Jamaicanmateyangroupie.com. To send in a story send your email to likeacopcar.78@gmail.com
December 21, 2014 9:34 am 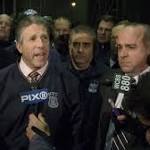 NYPD cops furious with Bill de Blasio turn their backs on the mayor as he enters hospital where officers died
The police unions have been ticked off by the support de Blasio has shown the legions protesting a Staten Island grand jury’s decision not to indict a cop in Eric Garner’s July 17 chokehold death.

Believing City Hall has betrayed them, cops demonstrated their anger Saturday by turning their backs on Mayor de Blasio as he entered a Brooklyn hospital to pay respects to two murdered officers.

A startling video shows a hallway at Woodhull Hospital filled with cops silently facing away from de Blasio as he walks a blue gauntlet.

“Mayor de Blasio, the blood of these two officers is clearly on your hands,” Ed Mullins, president of the sergeants association, said in a statement to his union members Saturday night.

“It is your failed policies and actions that enabled this tragedy to occur,” Mullins said. “I only hope and pray that more of these ambushes and executions do not happen again.”

He added that the blame also goes to “those who incited violence on the street under the guise of protest that tried to tear down what NYC police officers did every day.”

“We tried to warn,” Lynch said. “It must not go on. It cannot be tolerated.”

Despite the police protest at Woodhull Hospital, an emotional de Blasio praised the slain officers, Rafael Ramos, 40, and Wenjian Liu, 32, for making the ultimate sacrifice.

“These officers were shot execution-style, (a) particularly despicable act, which goes to the very heart of our society and democracy,” de Blasio said. “When a police officer is murdered, it tears at the foundation of our society. It is an attack on all of us. It’s an attack on everything we hold dear.

“We depend on our police to protect us against forces of criminality and evil,” the mayor said. “They are a foundation of our society, and when they are attacked, it is an attack on the very concept of decency. Therefore, every New Yorker should feel they, too, were attacked. Our entire city was attacked by this heinous individual.”

“Ever since this mayor took office there has been a sense of lawlessness that is rampant in every borough,” Mullins said in his statement Saturday night.

He noted that even Police Commissioner Bill Bratton was attacked in Times Square by protesters who splattered him with red paint at a Nov. 25 demonstration.

“If we can’t keep the PC from danger, what lies ahead for all of us?” Mullins said.

Following the Dec. 3 grand jury announcement not to indict Officer Daniel Pantaleo, de Blasio said he was “astonished by the decision” and called it a “very painful day for so many New Yorkers.”

Lynch said de Blasio’s comments made cops feel like “they were thrown under the bus.”

“It’s unfortunate that in a time of great tragedy, some would resort to irresponsible, overheated rhetoric that angers and divides people,” Walzak said. “Mayor de Blasio understands this is the time when we must come together to support the families and friends of those brave officers New York City lost tonight – and the entire NYPD community.”

“As we continue to investigate these senseless acts of violence against two of our city’s heroes, we pray for peace, support the men and women who bravely patrol our streets every day and mourn for the loss of these two police officers who gave their lives to keep us safe.”

City Council Speaker Melissa Mark-Viverito added, “NYPD officers face great danger every day to keep New Yorkers safe and violence against them will not be tolerated and will be met with the full force of the law.”

Some New Yorkers feared police will make them pay for the slayings committed by a cop-hating lunatic.

“If two cops got shot, what’s gonna happen to the neighborhood?” asked Lafiette Wells, 41, who lives in the Tompkins Houses, where the officers were executed.

“I just don’t want my son to come out the door and just be stopped because he’s black or he happens to be walking behind a police car and they’re all nervous and itchy-fingered,” Wells said. “My nerves are shot just thinking about it.”

2 hours ago
Zig Star
With the climate the mayor helped create, the cops know they are all sitting targets …

0
2 hours ago
Older Wiser
Unfortunately it will be the people of the City of New York who will pay the price for this double assassination. Response times will triple or quadruple as Officers will now automatically respond as backup units for every call taking cars out of service. New Yorker’s will die from heart attacks, strokes and other illnesses, store owners will be robbed, assault victims will suffer more serious injuries as availability of units disappears off the 911 Dispatcher Boards.

“Any available unit to respond” will now be met with SILENCE.

That is how it must must now be IN DeBlasio’s “HELL CITY” as New York’s Finest goes into “Survival Mode.”

12
2 hours ago
Manolo Ramirez
New Yorkers will die of stroke and heart attacks and other illness because NYPD won’t respond? I believe that is EMS that respond to those emergencies.

Cops have been shot in every administration. There are psycho’s like this guy every where. It has nothing to do with the mayor

2 hours ago
Marlon Weingrad
It has EVERYTHING to do with this Mayor – His policy of appeasement towards the “protesters” while throwing the NYPD under the bus & declaring them to be responsible for ‘centuries of racism’ have created a climate where these people feel not only emboldened, but justified for rioting, looting. assault & now murder.

54 minutes ago
dan ross
Incorrect, Mr. Weingrad. Showing support to people who don’t think the police should be able to kill unarmed citizens with literal impunity is NOT the same as fostering an open season on cops’ lives. Anyone who does think this is just simply not very smart. Unfortunately this includes the PBA and many cops themselves. The mayor expressed sympathy and understanding for protestors’ anger. As much as some morons think, this is several light years away from advocating any form of retaliation – or tolerance of retaliation – on any law enforcement officer. The cops who feel otherwise need to grow up.

20 minutes ago
Jason Werent
Wrong and small minded. Typical right wing mentality — something happens that is bad and you can simplify it and make it into another reason to hate half the people in the world.

6 minutes ago
Chicano
IF your saying cops will not do their jobs…then fire the cops!

3 minutes ago
timages113
…oh yes the world’s coming to an end! …why don’t be the first to blow your brains out!