This post is based on an email that was sent and in no way reflects the views and opinions of ''Met'' or Jamaicanmateyangroupie.com. To send in a story send your email to likeacopcar.78@gmail.com
July 22, 2014 12:22 pm

MP SAYS WE MUST GIVE GAYS A BIT OF LEG ROOM… 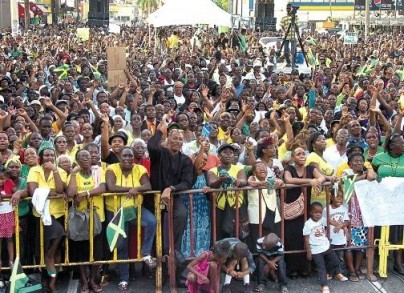 “Every dog have him day, every puss him twelve o’clock.” — Jamaican proverb.

Jamaica being a Christian country sees many of its citizens using the Bible as their reference point in terms of expressing their abhorrence of buggery, which is condemned as an abnormal act deserving of death. Interestingly, the Bible also condemns fornication and adultery — both of which attract similar punishment but do not attract a similar level of violent rejection by modern-day Christians.

The Bain/UWI saga has opened up a can of worms, as it is felt by concerned churchgoers that the ‘Gay Agenda’ is becoming too much in their face. The introduction of seemingly provocative and unsuitable sex education material in a number of private children’s homes by a Jamaicans For Justice-led effort has added more fuel to the fire. And so, on a sunny Sunday afternoon in Half-Way-Tree Jamaicans from all walks of life and various religious persuasions took off the gloves and came out punching, insisting that the buggery law should be kept as is, and that marriage should continue to be a union between a male and a female. The reported rape (buggering) of a male jogger by two alleged thugs also got the nation into a frenzy fuelled by the national media that have sought to over-sensationalise this issue.

There is nothing wrong with the Church taking such a stance. What would be wrong is if hatred, bigotry, intolerance, and violence are the weapons used by these followers of Christ to fight the Gay Agenda. To a large extent, some sections of the gay community had become too barefaced and so were seen as wanting to overpower the heterosexual community. But this gay issue is a far more complex one than is being imagined.

To begin with, Jamaica is not a homophobic society as has been posited over these many years based on the many violent deaths that have befallen gay men — some of them high-profile and well known individuals. A careful analysis of many of these murders will reveal that the majority of the victims were killed by someone close to them; either a lover or someone who is being used and then refused. Young men who have sex with men for money also can become very violent if they are “outed” by their seducers. There are also cases where promises are made and not kept in terms of financial rewards or expensive gifts. Then there is the tragic incidence in which an individual is infected with HIV on the ‘down low’ and ends up giving his girlfriend or wife. All these scenarios, and other such vexing situations, can lead to a bloody end and, indeed, crimes of passion.

In the meantime, we have to be careful as a nation that we do not take extremist positions. There has to be a middle ground to be found because, as renowned philosopher Bertrand Russell once said with respect to world peace, it is either co-existence or no existence.

Jamaica or the World is not going to wake up one morning and find no homosexuals around. Like the poor, they will always be with us. Which church choir does not have at least one gay soul singing his or her heart out praising the Lord alongside his/her straight brothers and sisters? So what is needed is to establish some ground rules based on appropriate education, tolerance, and a respect for citizens’ human rights as guaranteed in the Jamaican Constitution.

In this context, I am of the view that every generation and succeeding ones to come must deal with issues of sexual lifestyle and morality in a timely and rational manner. In this vein, I do not think that Jamaica, at this time, is ready to accept same-sex marriages. But I do believe that decriminalising buggery should not be seen in the narrow way as those who object to it are doing. In that the State ought not to interfere with what goes on in the private space of consenting adults. Is it that doors should be kicked down to catch persons in the act?

In the final analysis, we all need to take a deep breath and then debate this controversial matter in a way that does not make us descend into barbarism or, even worse, neo-fascism. Lest we forget, Hitler started to persecute homosexuals before turning on the Jews, who he sought to annihilate.

George Weinberg, PhD, clinical psychologist and author of Society and the healthy homosexual” (in which he coined the term homophobia), proposed that those who harbour prejudice against homosexuals, and not homosexuals themselves, are suffering from a psychological malady, an irrational state of mind. Weinberg, though supposedly heterosexual himself, became a leader in the ultimately successful struggle to have homosexuality removed as a diagnostic category from the DSM — the professional therapeutic handbook. Indeed, he has argued that genuinely straight men do not oftentimes react violently to homosexuals; it is those who suffer from sexual insecurity.

Lloyd B Smith is a mmember of Parliament and deputy speaker of the House of Representatives. The views expressed are his own and do not necessarily reflect those of the People’s National Party or the Government of Jamaica. Comments: lloydbsmith@hotmail.com