This post is based on an email that was sent and in no way reflects the views and opinions of ''Met'' or Jamaicanmateyangroupie.com. To send in a story send your email to likeacopcar.78@gmail.com
October 9, 2016 9:42 am

His life might have been short-lived but Dominic James made a huge impact on the lives on many.

Affectionately called “Delly”, James’ positive impact on others both on and off the field was evident by the hundreds of mourners who turned out yesterday to bid farewell to the once-promising and well-loved footballer at a thanksgiving service for his life at the Holy Trinity Cathedral on North Street in Kingston.

The huge church hall in which James’ body lay in a blue casket decorated by pictures which reflected his life on the field in his signature number seven, offered only standing room as mourners spilled over into the churchyard and under tents.

Many wept silently and nodded in approval as tribute after tribute of gratitude and blessings recalled the kind-heartedness of the young man of few words whose life said so much and whose infectious smile captivated the hearts of many. 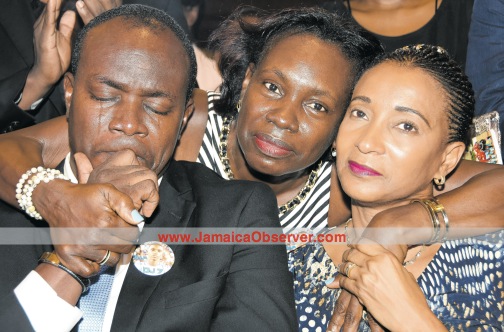 He was remembered as a wonderful son, nephew, cousin, friend, teammate and a Godly young man who respected authority and every single person he came in contact with regardless of age and rank… a young man, who touched, taught, impacted and loved so many.

A gem crafted to inspire, an exemplary scholar and child, were also popular among the tributes as some lauded his incredible positivity which will forever be etched in the hearts of all who met or connected with him and also for his talents and his ability to motivate others.

His parents, David and Denese were well supported by family members as well as other relatives and well-wishers, among them Government ministers and Senators and Opposition Leader Portia Simpson Miller. The family was also heartened by the outpouring from the Jamaica College, Excelsior High and Waterhouse football family as well as members of the Jamaica Football Federation.

On September 20, the football fraternity both locally and abroad was rocked by the passing of the 18 year old, who made his transition at the University Hospital of the West Indies, after collapsing two minutes into an ISSA/FLOW Manning Cup match against Excelsior High at Stadium East. The late captain of the St George’s College team would have celebrated his 19th birthday on September 26.

The cathedral was bursting at the seams as mourners inside the church and those outside stood near the windows and doors and listened keenly as Pastor Napoleon Black delivered the sermon, offering comforting words to the family and encouraged those in attendance to use James’ life as a turning point for change as a nation.

Prior to the word, coach of Jamaica College Miguel Coley, in an emotional tribute, saluted the accomplishments of James who won numerous titles while sporting the dark blue of the Old Hope Road school.

“Dominic James has taught us to be humble as only time matters, he has taught us to reflect what we desire, become what we respect and mirror what we admire. There are commas, semi-colons and colons to this young man’s life but no full stop, as life goes on in the lives of players who love him dearly and he loved the same.

“As we question why he had to go so soon in such a fashion, I appeal to the mother and father “Let God”. When I asked my players to write about how they felt about Dominic you could see the love jumping off those pages, the genuine care, their tears and frustration. One player wrote: “You will always remain a major inspiration in my life and the whole Jamaica College team will be happy to carry on your dream,” Coley noted during his tribute with the Jamaica College team and staff standing in support.

An emotional Neville Bell, coach of St George’s College, also shared a few words from members of his team which won the Super Cup last year with James.

“You are more than a friend, you are like a big brother, counsellor, advisor; we are family. Whenever my back was against the wall you were always there to give a hand, whenever I am down I would just look at you for your big, bright smile and it would always cheer me up,” one player wrote.

“I am sorry I didn’t get the chance to tell you how much I love you and that I would do anything to see that angelic smile of yours. I am elated to have met you and shared so many wonderful moments together words can’t explain how much I love you my brother, my friend, my captain,” a teary Bell read from the note of current captain Alex Marshall.

“The fact that I made him captain after one season speaks not only to what he did on the field but certainly to his character, leadership and maturity and probably, most importantly, to the respect he earned from his peers,” added Bell.

Meanwhile, Olivia “Babsy” Grange, minister of culture, gender, entertainment and sport, quoting the late South African President Nelson Mandela, encouraged others to commit themselves to inculcate certain characteristics in their lives as a tribute to the life of James.

“What counts in life is not the mere fact that we have lived, it is what difference we have made in the lives of others that will determine the significance of the life we live,” the minister stated.

She added: “The reality of the loss weighs heavily on all of us; some of the characteristics we saw in young Dominic, full of life, loyal, strong and a true leader. Students and all young persons who are here, let us stand strong and be resolute so that you will forever be transformed into better persons in celebration of the life of Dominic and the privilege of knowing him.

“As minister and representing the Government, we will leave no stones unturned in our efforts to put measures in place to protect our children and young people who are physically active not only in terms of competitive sport, but all young persons under our charge.

James will be laid to rest during a private interment at a later date.