This post is based on an email that was sent and in no way reflects the views and opinions of ''Met'' or Jamaicanmateyangroupie.com. To send in a story send your email to likeacopcar.78@gmail.com
December 20, 2014 8:25 am 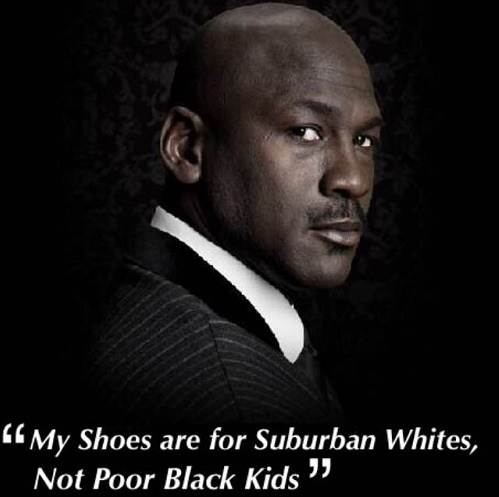 “I make shoes for white suburban kids, not the poor black kids. That would be like opening a restaurant for people without stomachs.”
Dec 18, 2014

Several black activists have accused Michael Jordan of not doing enough for the black community complaining that even his shoes are too expensive for most black youths, a charge Jordan has answered himself by saying, “I make shoes for white suburban kids, not the poor black kids. That would be like opening a restaurant for people without stomachs.”

Jordan did state that he and his friend Larry Bird had originally designed a shoe made for blacks called Air Birds which featured a silhouette of the Great White Hope displaying strong fundamentals. However, the shoes proved to be disastrously unpopular with black youths as many complained about the shoes smelling “like dookie,” most likely due to the fact that the shoes were largely composed of discarded potato skins and horse dung.

“It was a cost preventive measure on part of the company. How were we to know that black kids wouldn’t want to wear shoes with an emblem of a tall white man throwing an effective dribble pass which may or may not have smelled like compost? It smelled like a farm because it was the Air Bird. The man grew up on a farm or something like that,” said Jordan.

Jordan continued by stating, “I don’t want to hear any complaining about can or can’t afford what. There isn’t any Phillipinos or Indonesians that are going to be wearing Jordans anytime soon and they’re making them for five cents an hour.” My Air Jordan’s are the new Blood Diamonds.”