This post is based on an email that was sent and in no way reflects the views and opinions of ''Met'' or Jamaicanmateyangroupie.com. To send in a story send your email to likeacopcar.78@gmail.com
February 14, 2015 8:00 am

MAN PLEADS GUILTY TO GRUESOME MURDER OF 14 YO 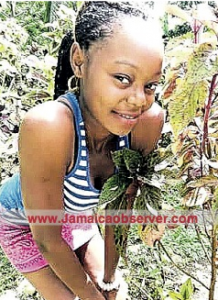 He is scheduled for sentencing next Thursday.

Robinson who is of a Savanna-la-Mar, Westmoreland address, waived his right to a preliminary hearing and headed straight to Circuit court, which is now underway in the parish.

He is represented by attorney, Herwin Smart. The case is being presided over in the Westmoreland Circuit court by Justice Martin Gayle.

On Tuesday January 27, Santoya’s body was found in a garbage bag under a bridge close to the Frome Technical High School, where she was a grade eight student.

Robinson was taken into custody shortly after the grisly discovery.

A subsequent post mortem results showed that the young student was pregnant. The post mortem concluded that young Santoya was strangled.