This post is based on an email that was sent and in no way reflects the views and opinions of ''Met'' or Jamaicanmateyangroupie.com. To send in a story send your email to likeacopcar.78@gmail.com
October 16, 2016 10:36 am 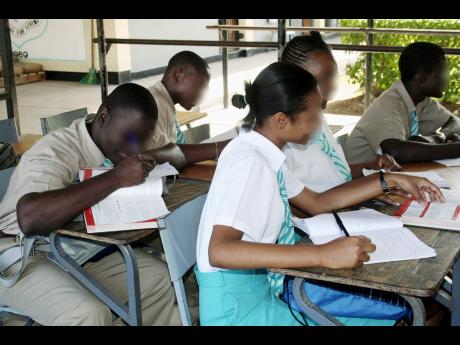 Students and staff at the Denbigh High School in Clarendon say they are living in fear, as hoodlums continue to prey on them, stealing cellular phones and other valuables as they make their way to and from school.

“It is something that has been happening since school started this term. This road to school is continuously like that with the robberies. I am afraid to walk to school in the mornings and the children worse,” said one female staff member, confirming the incidents after informing The Sunday Gleaner that the principal and her deputies were away at a meeting when we contacted the school.

“All of us here are very scared. This is something that has been going on for a long time. The police came here and I’m not sure what they are doing or what plans are in place, but it is really a problem here.”
She cited at least four recent incidents where members of the school community were held up.

On Monday, two female students reportedly had their phones stolen after two men jammed guns in their faces and demanded the instruments. The girls were apparently walking from a nearby taxi stand, past the Denbigh Primary School when the gunmen pounced. They were reportedly left unarmed.

The ordeal was a worrying topic at the school during the week, compelling administrators to issue a warning to the students not to openly use their phones on the way to and from school. Students were also told to walk in groups, as opposed to traversing the road by themselves.

Other reports are that at least one teacher fell victim to the robbers earlier this year, and that some footballers playing in the vicinity of the school compound were robbed recently.

“I am terrified, trust me. My son just started to go to the school and I am now confronted with these issues, of which nobody informed me,” said Carol Anderson, recalling her frustration when her child, a seventh-grader, informed her of the school’s announcement last week.

“I told him not to take the phone to school, but who knows, he might just be in the vicinity and those crazy people decide to fire shots at the persons they are robbing if they refuse to give up their phones. He could get shot. Something has to be done.”

“When you hear about the gun thing you really have to get serious now. Robbing the phone is one thing, but I don’t want to hear that I sent my child to school and them shoot him over phone,” lamented Maxine Dixon, the parent of a grade-eight girl.

There were no reports that students and staff at the nearby Denbigh Primary School were being plagued as well, and one teacher at that institution shared that the police carry out regular patrols in the area.

It is for this reason that Senior Superintendent of Police Fitz Bailey, head of the Clarendon Division, was shocked upon hearing of the complaints being raised at the Denbigh High School.

“I have been making checks since today [Thursday] and nobody can confirm that from my office. I can recall one incident involving some guys playing football, but I don’t have any reports of an increase based on what is communicated to me from my investigators,” said Bailey.

“The police continue to have routine patrol of that entire vicinity. I can’t even say that I will dedicate a patrol around there, because if there are robberies and these are not being reported to the police, then there is no way that we will know about it.”