This post is based on an email that was sent and in no way reflects the views and opinions of ''Met'' or Jamaicanmateyangroupie.com. To send in a story send your email to likeacopcar.78@gmail.com
April 21, 2014 12:48 pm 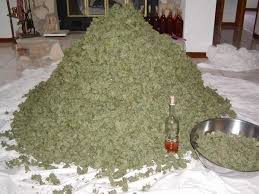 After more than a century, the island of music and marijuana seems ready for legalization

It seems the United States is inching ever closer to decriminalizing marijuana, following the passage of new laws in Colorado and Washington, but on the seemingly weed-friendly shores of Jamaica — birthplace of reggae music and the Rastafari — pot remains as illegal as it’s been for more than a century. It’s a paradox for an island nation that has become synonymous with names like Bob Marley and Peter Tosh, but Jamaican politicians and legalization advocates say change is coming soon — perhaps as soon as this year.

Earlier this month, about 300 people gathered in the Jamaican capital of Kingston to launch the Ganja Future Growers and Producers Association, the country’s first lobby group of marijuana cultivators. The new organization will push for the creation of a regulated weed industry in Jamaica, which it says will boost the country’s economy and spur medical research. As more countries look to liberalize their drug policies, the hope is that decriminalization will allow Jamaica to become something of a pot powerhouse.

“With the global movement that is emerging — in Uruguay, in parts of Canada, in states in the US — there is a sense that the moment is right for Jamaica,” says Rupert Lewis, professor emeritus of political science at the University of the West Indies.

“an unnecessary burden on an already burdened criminal justice system.”

Advocates say that a legal weed market would generate extra tax revenue and create new jobs in Jamaica, which has been hampered by high unemployment and inflation rates since the financial crisis of 2008. There’s also hope that it may help alleviate the country’s notorious problems with crime and gang-related violence. Ganja growers would be able to sell their herbs legitimately, rather than on the black market, while police and prosecutors would have more time to deal with more serious crimes, rather than small-time possession busts.

“On a weekly basis, hundreds of young men go through our court system because of simple possession,” says Delano Seiveright, a businessman and director of an independent marijuana reform group. “It is an unnecessary burden on an already burdened criminal justice system.”

No legislation has been brought forth thus far, but the movement has support from leaders in both political parties. Phillip Paulwell, a leading member of Parliament, has said he expects lawmakers to decriminalize small amounts of marijuana by the end of this year, and a recent survey found that over half of Jamaicans would support it.

Broad support, but not quite consensus

But Jamaica is home to a large religious and conservative population, and there are some concerns that decriminalization could lead to broader social problems. Even some small-time ganja growers fear they’ll be pushed out by bigger players as the industry grows. “The Jamaican government must decide whether morals, values, and stability of the state are worth renouncing for the marijuana dollar,” Dayton Campbell, a member of Jamaica’s parliament, said during a debate on the issue last year.

“Rastafarians smoke marijuana as a part of their religious rituals but most Christian denominations in Jamaica believe that marijuana use could result in further moral and societal decay,” says Suzette Haughton, a professor of international law and security at the University of the West Indies. “So even in Jamaica, this issue is a contentious one, there exists no consensus.”

Marijuana has been illegal in Jamaica since 1913, when the island was still under British rule. Legalization has been up for debate for more than a decade, but previous attempts floundered, experts say, because of the outsize influence of the US, Jamaica’s largest trade partner. Jamaica is the biggest Caribbean supplier of marijuana to the US, according to a recent report from the US State Department, and it’s a major transit point for cocaine and other drugs trafficked from South America. The country has also signed on to international treaties that prohibit the trade and transit of marijuana across borders.

“They don’t fear retaliation by the United States.”

“What held Jamaica back in the past was fear of a retaliation by the United States, and now the case is different,” says Charles Neeson, a Harvard law professor and legalization advocate who delivered a rousing speech at the ganja association launch in Kingston. “They don’t fear retaliation by the United States. They don’t have the same reason to fear it.”

Those concerns have waned in large part because of recent laws that allow for the recreational use of marijuana in Colorado and Washington. Although marijuana remains illegal under federal law, the White House has said it will not intervene with the states’ initiatives, and Attorney General Eric Holder recently said he’s “cautiously optimistic” about their progress so far. Paul Armentano, deputy director of the National Organization for the Reform of Marijuana Laws (NORML), says that given this precedent, “it would seem inconsistent for the administration to take a more confrontational approach” to similar laws in another country.

Working decriminalization through the notorious jungle of Jamaican bureaucracy won’t be easy, and as long as demand for illicit marijuana remains high in the US, experts say it will do little to stem large-scale trafficking. But supporters say now is the time to finally reverse course after 100 years of prohibition.