This post is based on an email that was sent and in no way reflects the views and opinions of ''Met'' or Jamaicanmateyangroupie.com. To send in a story send your email to likeacopcar.78@gmail.com
November 28, 2015 8:30 am 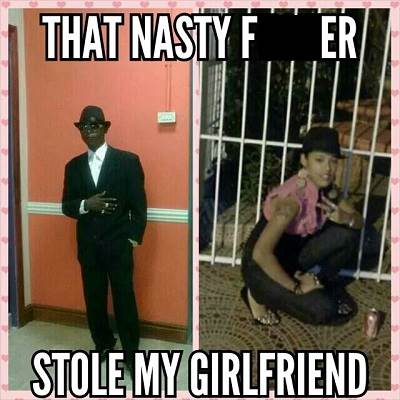 Funny story how i met my gf i met her over a S.I.M. card as i worked for a phone company. This was 3 years ago. She was gangly and shy and skinny and didnt seem to have much friends. We limed and had fun until i took her to her first fete. Snowflake. I got her VIP passes and bought all her clothes, jewellry and makeup. That gangly shy girl had been transformed into a snow princess that night and it was the night i told her how much i loved her. From that day on she got everything she wished for. Money.Clothes. Love.Respect. she even got all the latest phones as they came out.

She had a good time and had a great life with me to the point that our appearance in public was a great inspiration to couples young and old. It seemed that our love would last forever. Three years later we used to karaoke at a popular hotspot on fridays and we would laugh and sing and have a good time with our friends. A new guy came to sing at karaoke and he was Mr Shane Mitchell aka smalls. He was a sharp dresser, and my gf and i limed with them unbeknownst that my gf and him swapped numbers. The next thing i knew was that he was calling her all hours of the night and early in the morning. As i got up to go to work. Then came the texting. The whatsapp. Then sex got dull as she complained of being too tired to have sex.

Going through her phone once i saw a bunch.of her naked pics being sent to him and i got angry and asked her to lock him off. She said she was sorry and it never happened again. Then in august we went a group lime and he came and she got up and sat next to him and chatted whole time on the bus. When we got there she started coassin on me. I wanted to dance and she brushed me off. I got frustrated and went outside to cool my head as i am not a person of violence.My breds noticed this and pulled mr smalls aside and spoke to him that i was upset that my gf was liming with him. Did u know what that f**ker did? He came up to me,boldfaced and said”I hear that u have a problem with me liming with ur gyul”those were his exact words.

Who the f**k did he think he was?saying such a boldfaced thing like that. all manners of things ran through my head about how to deal with this. “Dat is lil bwoy ting and i cyah stand dat.”he spoke. Was he trying to make me look small? I almost lost it and i wanted to just snap his neck for such audacity. That disgusting.little slime made me look small in front of her.my gf just turned around and avoided the argument and that further got me angry. She never defended me not one bit. She defended that a*shole. I loud her up and told her to go in the bus and sit down she yell tht we done and stormed off. I told him to never speak to her again and he was all smug. I left her house with all of my stuff the other day and she just said that he is her friend.

What kind of friend belittles ur man like that?i got her a new phone the other day and she.was seen putting his pic as the display pic and she limes with him almost every other day, spending all her money on him and giving her a bunch of hand me down clothes and accesories from his wife. Oh yes!and mr smalls is currently married!!!!him and his wife have a fallout but they are married and have a son together and now he wants my gf too. What kind of greedy man are u?u deserve a good beating and ur testicles removed. Such a vile and shameless man. U deserve nothing. I will find u and put my fist or anything thru ur disgusting face. I still love my girl,i want her back but trinippl mentality disgusting.