This post is based on an email that was sent and in no way reflects the views and opinions of ''Met'' or Jamaicanmateyangroupie.com. To send in a story send your email to likeacopcar.78@gmail.com
June 30, 2016 11:54 am

Five Trinidadians who arrived in Jamaica without proof of a yellow fever vaccine were denied entry on arrival at the Norman Manley International Airport on Monday.
They arrived on a Caribbean Airlines (CAL) flight. Four of the twelve passengers who arrived on a Copa Airlines Flight from Panama were refused entry.
Eight persons were quarantined at a hotel in Kingston, the Jamaica Gleaner reported.
Sources at Caribbean Airlines, in Port of Spain, who wish to remain anonymous, confirmed that Jamaica has enforced the requirement for passengers traveling from Trinidad.
The airline sent out a reminder on Wednesday, insisting that passengers should have proof of the vaccine on the International Immunization Card, to be issued by the Ministry of Health.
On the other hand, the Barbados Today Newspapers is reporting that the island’s Acting Chief Medical Officer Dr Kenneth George says “Barbados will not be following Jamaica’s lead in banning travellers from Guyana and Trinidad, which have been listed by the World Health Organization (WHO) among countries at risk for yellow fever transmission. 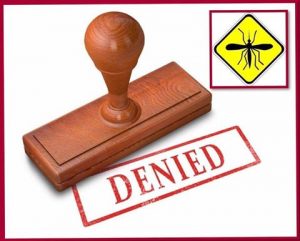 “George believes that medical authorities in Barbados are on top of the situation and he insists there is no need for a ban at this stage, especially for passengers coming in from “low endemic” areas”.
He said that “issues of yellow fever resurfaced as a result of a current outbreak in Central Africa, where the virus is blamed for hundreds of deaths.
The approach of the Ministry of Health is not to wildly ban persons from entering Barbados, but to work with agencies at the airport – the immigration officers, environmental health officers – who are scrutinizing where people are coming from,” George added.
There have been no reports of Yellow fever in Jamaica.