This post is based on an email that was sent and in no way reflects the views and opinions of ''Met'' or Jamaicanmateyangroupie.com. To send in a story send your email to likeacopcar.78@gmail.com
September 8, 2013 9:46 am 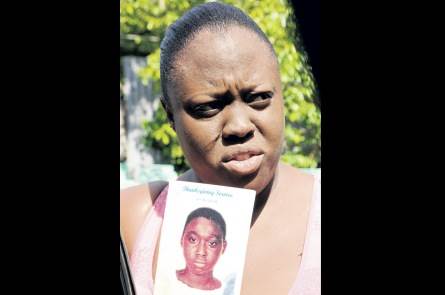 EVER since Nario Coleman was brutally stabbed to death by another student at the Penwood High School, the lives of his family and close relatives have been in tatters.

Coleman, 16, was being bullied by another student as others watched and egged on both boys to fight. Soon Coleman, who was the smaller of the two boys, got frustrated with being banged around and drew a pair of scissors from his school bag and scraped the bulkier rival.

[Hide Description] Coleman’s aunt, Faithquita Hall, is a picture of grief as she poses with his picture last week.(PHOTO: LIONEL ROOKWOOD)
[Restore Description]
1/1

The move proved to be fatal.

Another boy handed a knife to the student who was scraped and he proceeded to inflict about six stab wounds to Coleman’s back, stomach, arm and chest.

The incident was captured on video which is in the hands of the St Andrew South Police who criticised the school administration at the time. The cops contend that if an adult had acted quickly, then the incident could have been defused and Coleman would have been alive today.

The Jamaica Observer viewed the video footage which lasted about seven minutes.

Ever since that, Coleman’s mother, Diana McLeish, has left the community of Balcombe Drive where she lived with her five children and even some of her closest relatives don’t know where to find her.

However, the Sunday Observer managed to catch up with the grieving mother and she told a tale of woe.

Her four other children are all living in different places and the woman is desperate to get the lives of her and her children back on track.

“I am looking somewhere to live. My children are all over the place living with people. One of my sons is living on the gully bank and he has stopped going to school. I want to get him out of that area because I am afraid he will take up badness and try to take revenge for his brother,” McLeish said.

She said that the death of her son has rested heavily on her mind and she cannot sleep at nights.

Coleman would have turned 17 on September 20, and as his birthday approaches, the pain becomes even more intense for his battered mother.

“You see like how him birthday soon come round, me start feel very depressed and the whole thing just drop pan me head all over again,” she said.

Her sister, Coleman’s aunt Jacqueline McLeish, is also worried about her sister’s mental state since her nephew’s brutal demise as she sometimes just stares at her son’s picture and remains silent for hours.

“Why did they have to kill him? My sister take it to heart because is her belly pain. I don’t know what I would do if it was my belly pain. She is suffering and can’t get nowhere to live. Her children are all over the place. She has none of them with her. All of them used to live together. Only God knows what’s best,” she said.

The teenager who allegedly killed Coleman and the other youth who is said to have abetted him have been charged with murder and conspiracy to murder respectively. However, both have been granted bail and are back on the streets.

That fact has been burning a hole in the heart of Coleman’s elder cousin, Faithquita Hall, who still resides at Balcombe Drive.

“Since the incident, everybody just take it to heart. The whole family just disjointed. Then the boys who do the act are on the street enjoying themselves while my cousin will never be able to grow up and start his own family. He was a quiet boy and never deserve to die like that,” Hall said.

Immediately after the incident, reports emerged that the fight started over a dispute over gambling, but Hall had a different theory and refuted those claims.

“It was not over no gambling. The boy who do it live in the community and his friend had a fight with his (Coleman’s) brother. They planned to attack ‘Austin’ at school. It was all a set up thing,” she said.

She, too, was worried about Coleman’s 14-year-old brother who had quit school and may be hanging with the wrong crowd. The young teen has reportedly taken up smoking and is still very aggrieved about the killing of his elder sibling.

“I am really worried about the little brother. I want him to go back to school, or bad things might happen to him. I fear he might take up badness,” she said.

But, similar to her other relatives, Hall has placed faith in a higher being that, somehow, good may come out of this heart-rending situation.

“I leave it in the hands of God,” she told the Sunday Observer.