This post is based on an email that was sent and in no way reflects the views and opinions of ''Met'' or Jamaicanmateyangroupie.com. To send in a story send your email to likeacopcar.78@gmail.com
August 28, 2016 11:39 am

A busy time outside the United States Embassy in Liguanea, St Andrew.

For some residents of Standpipe — the community across from the US Embassy in Liguanea, eastern St Andrew — the mission’s presence has brought with it a means of survival.

The vicinity is riddled with entrepreneurs who all offer a service targeted at people who conduct business at the US Embassy, following its removal from its Oxford Road address in 2006 to its present location at 142 Old Hope Road.

The embassy’s website warns that: “Electronic items, including cellphones, cameras, beepers, and pagers are prohibited on the embassy compound and should be secured elsewhere before entering the embassy. The embassy reserves the right to limit the entry of possessions and does not have the means to store these items.”

With this policy, persons like Devon Stewart who stores ‘unauthorised’ devices on the outside of the facility, has had an opportunity to earn what he terms “an honest living”. 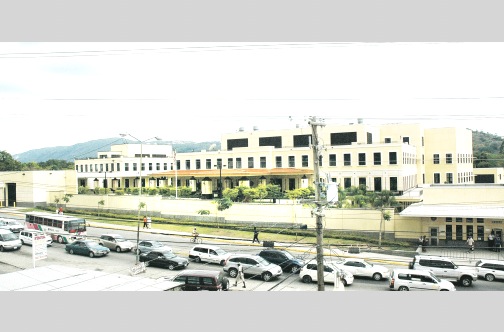 But since his start in 2010, the entrepreneur told the Jamaica Observer that business has slowed in recent times.

“Right now it not going on like how it used to,” Stewart shared when asked how business has been for him. “Tings change ‘cause it look like tings get a likkle harder,” suggested Stewart who held dearly his string bag used to store the items.

Despite the challenges, Stewart boasted the efficiency of the services offered.

“Di greatest ting, nobody nah say dem miss tings up here so, ‘cause we get tings an’ we keep tings weh value all over $100,000 fi people, di phone weh dem give we an’ di bags an’ laptop an’ dem sumn deh,” he said with pride.

He noted that, like any other business, his entity was systematic and ‘official’. Proudly displaying the cards he issues to customers, Stewart explained the efficiency of his system. “You get a card, me have di phone, we keep di phone dem an mek sure everything alright,” he noted.

Another ‘phone keeper’, who has been offering his service for the past 10 years, noted that the profitability of his business fluctuates. His reasoning: “A million phone can come out here an a only three me store fi di day.”

The decade-old service provider, in stating that there were over 20 personnel along the roadway now, said the competition had increased since he started in 2006.

One merchant, who only identified herself as Ann, told the Sunday Observer that she resumed selling at her stall roughly seven months ago when she lost her job.

“Really, right now I’m here [but] it nah gwan too much enuh, just hand to mouth; you can fill a gap an everything, but it’s ok so far,” she said.

She said the cost is dependent on the value of the item, but isn’t usually greater than $500.

“…Because if we drop the phones we have to pay for it,” Ann reasoned. “It’s storage enuh, so we have to keep it safe…and when you come out you get it. Sometimes we charge $200 or $300; dem likkle bit a money deh we a charge,” she noted.

“Sometimes the people dem don’t have it, so when they come, we keep dem phone fi free; we just tell dem fi buy we a juice, an ‘dem just buy we a juice, give we a $100 an dat cyaan do nothing, but dem just still help out a situation,”Ann continued.

Asked whether or not persons were comfortable with a stranger keeping their personal items, Ann confidently told the Sunday Observer: “Yea, man, because you approach them properly, you approach them nicely, you go to them tell them ‘good morning, good evening, good afternoon’, and take it from there.”

The embassy website also states that, while visitors’ parking is not provided, “ample commercial parking is available in a lot close to the Embassy”.

“Yuh want a park?” they can be heard shouting.

One ‘parker’, who requested anonymity, said the cost for parking is dependent on the type of vehicle. This cost, according to him, can be as low as $300.

Though he did not explain in detail, the service provider noted that he also operates a chair rental service to persons waiting to enter the compound.

To alleviate the struggle of standing long hours, some residents rent plastic chairs to persons waiting to enter the compound. Scores of persons were observed seated across from the embassy, often with an envelope of documents in hand.

In addition to parking and device storage, some vendors line the corridor, selling an array of items including: fruits, snacks, juices pens and mints.

Gwendolyn Clarke, aged 81, said that she has been selling produce at her same station years before the embassy moved to its current location.

She admitted that since its relocation, however, her business has improved.

“Mi have five kids right yah so. An di children weh me have right yah so give me grand an great grand,” she said, admitting that it has sustained her over the years.

“It is not big like how mi want it to be, but thank God mi can buy mi likkle food and medication” Clarke noted.

Like others, the senior citizen said that her busiest time of day is in the morning when persons buy fruits while they await the opening of the embassy.

Being self-sufficient is of utmost importance to residents of Standpipe, who sell goods and services to persons going into the US Embassy daily.

Another fruit vendor, who identified himself as Brooks, told the Sunday Observer that he started his business to avoid breaking the law and robbing others.

Brooks said that he goes to the market to purchase goods as early as 1:00 each morning and is back by 5:00 am to offer the early Embassy-goers some fruits for breakfast.

Demus, a soup and porridge vendor, admitted that the presence of the Embassy has boosted his business.

“In a sense me would a say di business better. A nuh nothing big, but is a likkle hustling. We an di embassy alright cause we nuh see dem a deal wid we inna no disrespectful way,” he noted.

He noted that he had been selling soup on that corridor years before the embassy was relocated there.

“Business alright, as a likkle man inna di street, di business kinda alright. Now an’ den we get likkle harassment from di police, but it alright,” added the soup vendor.

Demus, who sells his soup for $150 and $200 a cup, was almost out of soup last Wednesday morning when the Sunday Observer visited his stall.

Photography is another service offered on Old Hope Road to embassy customers. Though residents were tightlipped about it, the

Sunday Observer noticed a photography station across from the Embassy.

The white sheet of cloth often used by photographers as backgrounds was quickly removed when the news team started enquiring about the service.

Recently counsellor for public affairs at the embassy, Joshua Polacheck noted that, between the 2013 and 2016 fiscal years, the number of applications went up from approximately 85,000 per year to 185,000 per year.

Earlier this month, the US Embassy confirmed that all interview dates for nonimmigrant visas were exhausted for the rest of the year. The United States Embassy now schedules up to 1,000 appointments daily for non-immigrant visa applications.