This post is based on an email that was sent and in no way reflects the views and opinions of ''Met'' or Jamaicanmateyangroupie.com. To send in a story send your email to likeacopcar.78@gmail.com
July 14, 2016 7:20 am

“You can help make your dream and mine come true,” Larry Mitchell, from Kokoma, wrote on his page.

The crowdsourced campaign, which was created on July 8, received five donations in the last five days — only raising $30 so far.

“You better not come back,” the anonymous bigot wrote.

Mitchell is asking for $100,000 for the trip to the continent, and told the Daily News he hasn’t decided which country he would visit if he makes his goal.

Mitchell, 41, said he was inspired to create the campaign after seeing an endless stream of racist messages following the shooting deaths of Philando Castile in Minnesota and Alton Sterling in Baton Rouge.

Ex-Ku Klux Klan head David Duke considers running for Congress
“It kind of shocked me, because we just celebrated Fourth of July and to come back the next week and see people saying ‘Go Back to Africa,’” the part-time forklift driver told the News. “If you want me to go ‘back’ to Africa, then pay for it.” 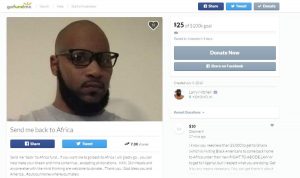 Mitchell, who’s lived in Indiana his whole life with his family, said he’s never been to Africa, making the “go back” insult even more insulting to him.

He doesn’t expect to reach the $100,000 goal on his joke crowdfunding campaign, but if he does, he fully intends on going to Africa.

Mitchell said he’d like to learn about the continent’s food and culture in certain regions, while also using the money to open a new restaurant.

The aspiring chef is asking for racists to open their wallets, and has no problem with taking their money.

“Money is green,” he told the News. “They take our money every day.”

GoFundMe said the statement fundraiser does not violate the website’s terms and conditions, a spokesman told the News.

“Ultimately, it’s up to the GoFundMe community of 25 million donors to decide which campaign they support,” Bobby Whithorne said in a statement.